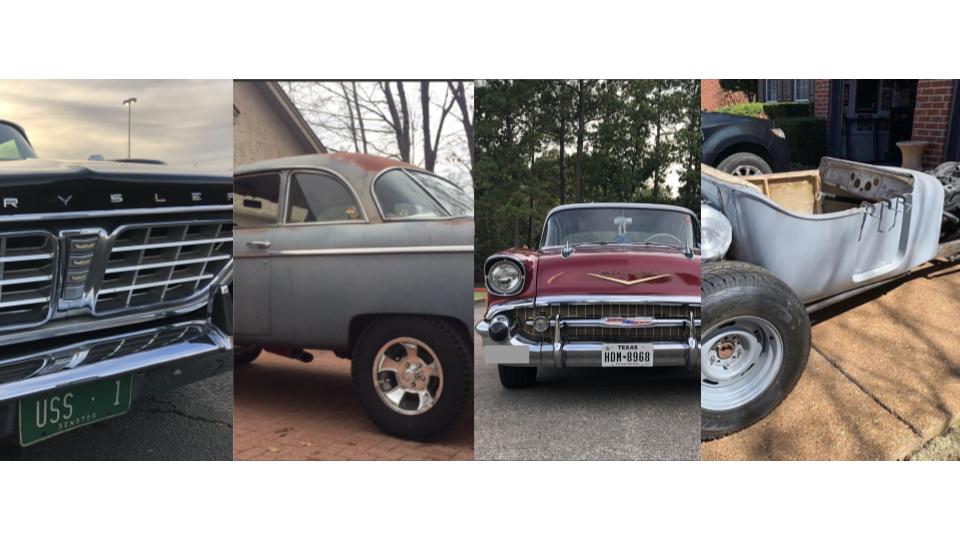 I received another update – Gordon updated me on his ‘63 New Yorker – so I’ve updated the Update article to keep you up to date on all the latest updates.

Thanks so much for your support of GHR this year. Here’s hoping your 2020 is a fantastic hot rodding year!

Gordon has installed a Petronix Ignitor electronic ignition in the Chrysler’s 413 wedge. In keeping with the from-the-factory look of the car, the Petronix kit fits entirely under the distributor cap (shown below) and does not require any external components. The kit even makes it easy to re-install the points and condenser components at a later time if desired.

You may remember that Gordon’s brother Russell frequently gives him New Yorker-related Christmas gifts, and he did so again this year, tracking down the last two missing chrome letters – the Y and the L –  that spell out Chrysler on the front of the hood.

And when you add the gift of 40th anniversary NHRA Southern National tickets he received from his son Kevin, it’s possible that Gordon won Christmas – from a hot rodding point of view anyway. 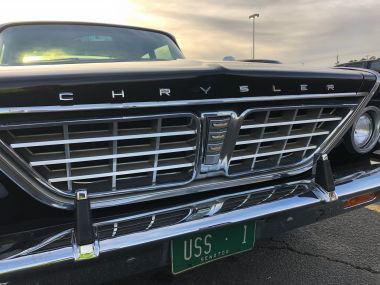 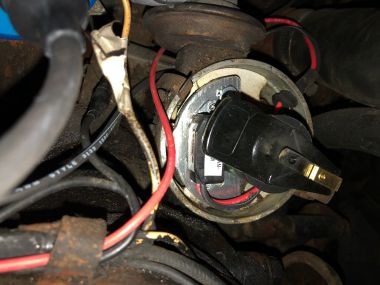 We featured Scott’s 1953 Willys Aero Ace Coupe in April. He was planning to debut the gasser-style coupe at the annual ‘Back to the 50s’ car show put on by the Minnesota Street Rod Association in June.

And everything was going according to plan until the Aero Ace blew out its rear main seal THE NIGHT BEFORE THE SHOW! Bummer…

Scott sent this update on the Willys:

“The Willy’s was down for the count in the fall.  I decided not to resurrect the spare parts short block. Instead I’m in final assembly of a 496 CID stoker Olds 455. It’ll still have the tunnel ram, dual fours and four speed, but with better cylinder heads, custom solid lifter UltarDyne cam and 12.5:1 compression. I’ll run it on e85. It’s a powerful fuel, in most gas stations here in Minnesota and will love the higher compression. It also runs cooler which should help the big incher and limited radiator size.  We’ll dyno it in January I’d expect, then put it in the Willys for the spring.” 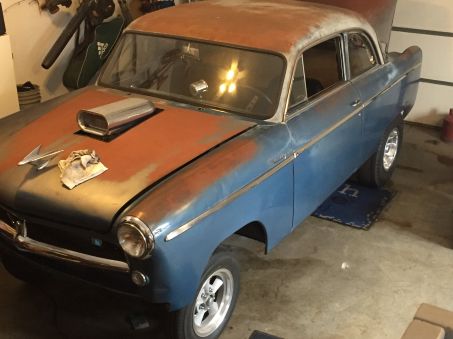 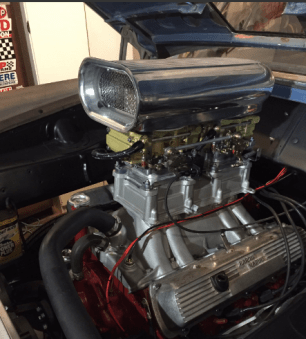 In May, Mike showed us how he built the chassis for his Roadster from scratch, in keeping with his Blue Collar Hot Rods philosophy of “Build ’em! Drive ’em!”

There’s been some progress on the roadster over the summer and fall, but not as much as Mike was planning. “My project is way off course,” he reported, thanks mostly to that danged ‘full time job’ thing that frequently gets in the way of hot rod projects.

But Mike’s continuing to plug away on the T-bucket and plans to reveal the roadster at the PPG Nationals in Columbus next summer.

He sent this update along with some recent photos:

“I just about have the body work done on the fiberglass body.  I molded in a ‘32 Chevy dash, molded in a distributor recess, and fabricated windshield posts and frame.  The frame is primed and ready for color. I’m cleaning up the GM 10 bolt rear end and giving it all new internals.  I have all the engine top end parts gathered; aluminum heads, cam, lifters, and roller tip rockers. The Edelbrock intake and 3 deuces will fuel it.  Over the holidays I will paint the block and assemble the engine. When spring weather returns I’ll start painting everything else and start assembly.” 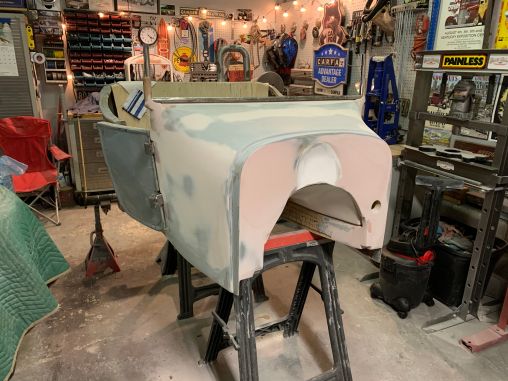 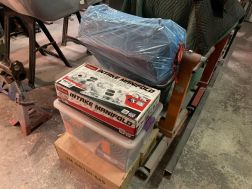 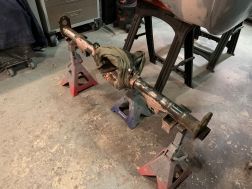 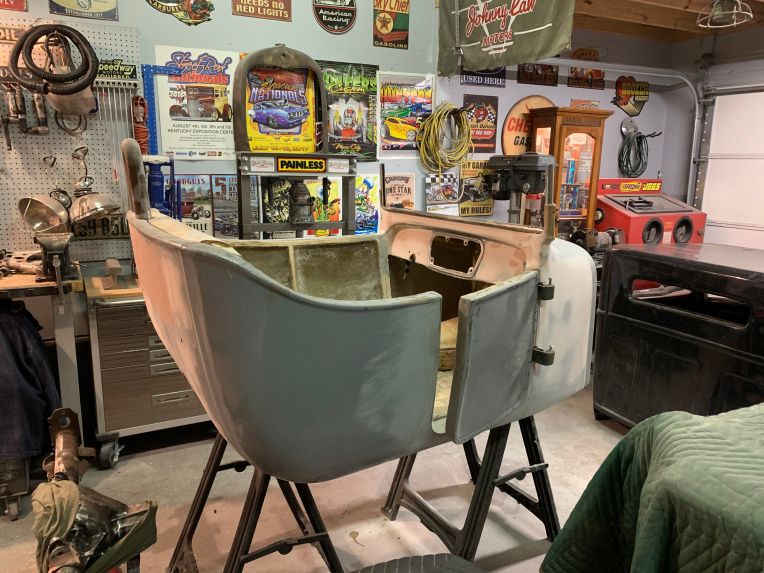 Dick’s classic ’57 Chevy was featured in GHR in July. It’s a great looking and great running hot rod, but there’s been some floor pan rust that’s been on Dick’s to do list.

He pulled his ‘57 into his garage this fall for what he’s calling ‘Operation Rusty Floorboard’. He and his son David completely stripped the interior – seats, carpets, trim, everything. Starting at the passenger front side, they have been cutting and drilling the bad parts out of the Chevy’s floor and tack welding in the replacement pieces. Dick’s wife Kathy is helping out too. It’s a big job, and still in progress, but the good news is that this thorough examination showed that most of the metal underneath the Bel Air is in good shape.

“We are doing this ‘on the frame’ vs a frame off and rotisserie approach, which hopefully keeps the scope manageable and gets us back on the road sooner. What we pulled out were galvanized sheet metal patch panels, which were pop riveted into place, with heavy layer of fiberglass mat and resin from a prior owner repair effort. About half the body braces are rusty and will be replaced.  In addition to floor pans and braces, and rocker panels, also will replace body mount hardware and bushings.” 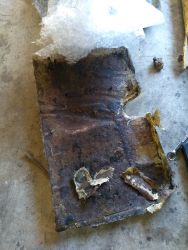 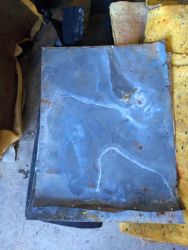 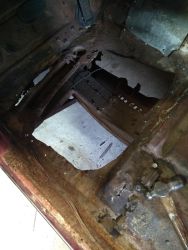 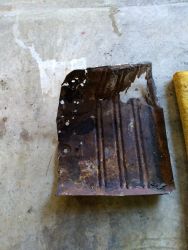 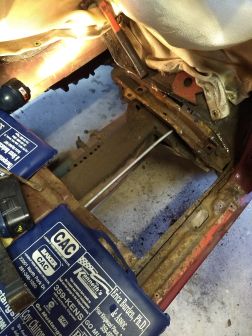 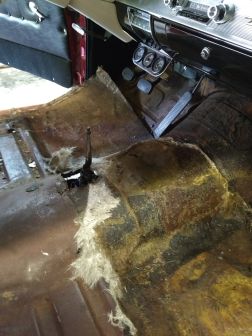 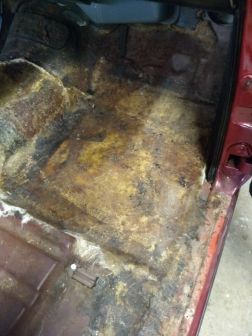 Photos courtesy of Scott, Mike, Dick, and Gordon
Thanks again for your support of GHR in 2019!