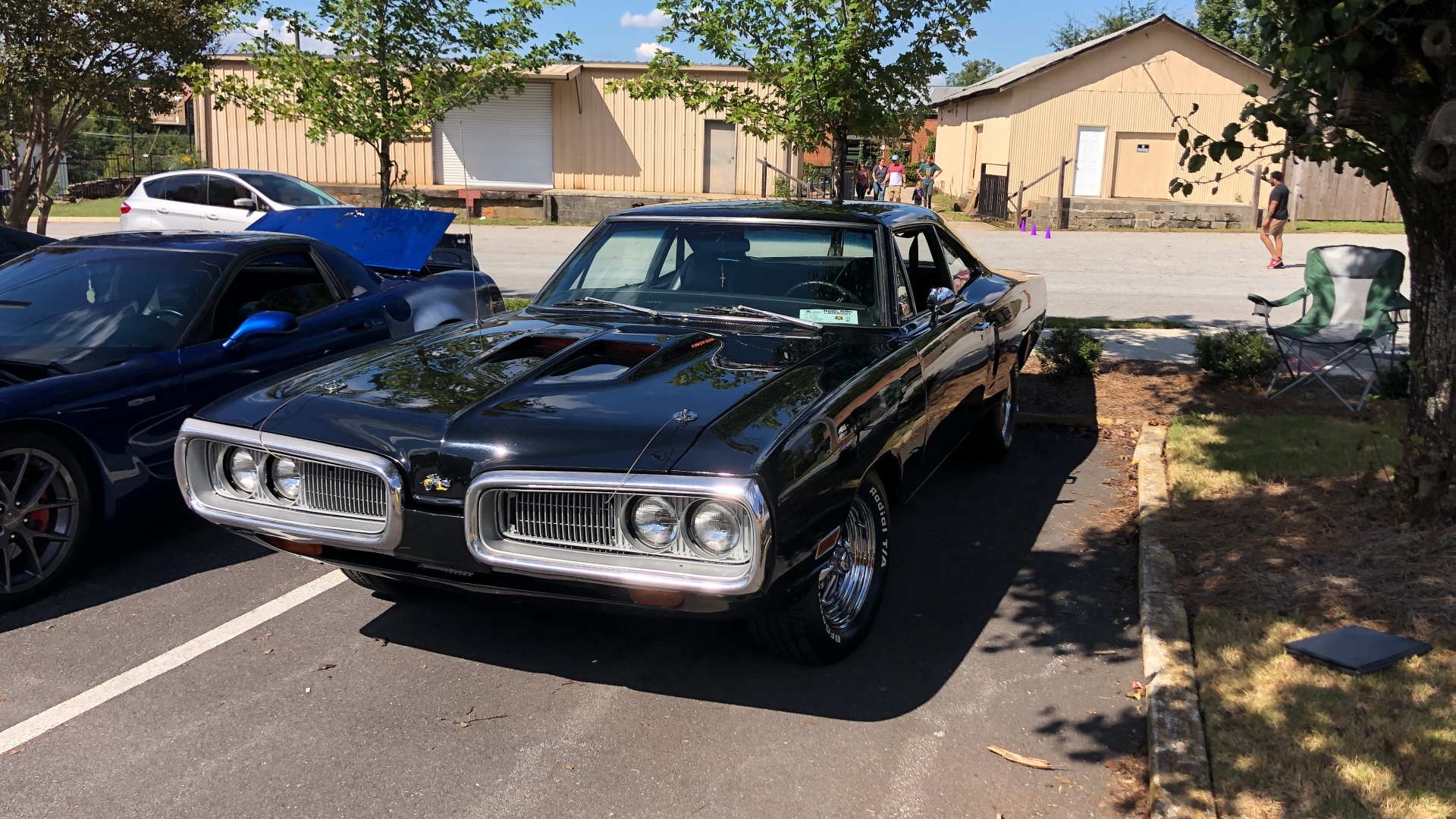 If you’d like to see what a 1970 Super Bee looked like when it was sitting in a Dodge showroom 51 years ago, check out Doug Lee’s immaculate Mopar. Although Doug’s done some hot rodding and freshened things up, his goal is “to keep it as original as possible.”

Doug will always remember the day he got the Super Bee. It was February 18, 2001 – the day Dale Earnhardt Sr. was killed at Daytona. Doug, who is a big Earnhardt fan, got the car that day and drove it home. His brother – a Mark Martin fan who liked to tease Doug about Earnhardt – called to tell him the news. Doug assumed his brother was just kidding, but broke down when he realized it was true.

Fortunately, the rest of Doug’s time with the B-body has been much happier. His focus has been on building the Dodge for cruising.

The 440 under the hood is largely stock. It has an 850 cfm Carter AFB four barrel mounted on a single plane Holley Dominator manifold. Doug’s added an Accel Super Coil and aftermarket electronic ignition.

The Mopar has an aluminum radiator and flex fan. Doug says there aren’t any issues with the big block keeping cool, even in the hot Georgia summers.

Factory exhaust manifolds run into a dual exhaust system with Flowmaster mufflers. Doug’s installed a set of cutouts as well, saying “I can open them up if I want it nice and loud.”

The factory 4-speed transmission sits behind a McLeod clutch. Even in its relatively stock form, the 440 was putting out enough power to cause the factory clutch to slip a bit. The heavy duty McLeod unit takes care of that problem. A Mopar 8 3/4″ rear end has 3.90 gears on the Positraction differential.

Doug made significant upgrades to the torsion bar front end, including polymer bushings and extra large sway bars. He’s installed Wilwood disc brakes up front and heavy duty drum brakes in the rear. Doug was talking about his Super Bee, but accurately described a lot of 1970s muscle cars when he said, “They tend to go fast but they don’t stop real good.”

The Super Bee isn’t a small car, but Doug told me that even with manual steering and manual brakes, it’s a pleasure to drive, and he attributes a lot of that to the suspension mods he’s made. “It drives really well with the new front end,” he told me. “I can drive it with one hand now – before it was two hand driving.”

This classic hot rod sports the classic combination of Cragar S/S mags and BFGoodrich radial tires. When Doug got the car it had wheels from a Chrysler 300. He changed them out last year. “I always wanted Cragars,” he told me. The appearance and stance couldn’t be better.

The body is all original. The Super Bee was a B5 Blue car from the factory, but had been painted black when Doug got it. He repainted it himself five years ago in his brother’s garage. Doug is a house painter by trade – his company is Lee’s Quality Painting – and the Dodge was his first attempt at painting a car.

The Super Bee’s paint is absolutely stunning. Doug said his expertise in house painting was applicable to painting cars. “It’s basically the same method,” he said. “Spraying is spraying. You just have to be a little more careful with the cars.”

The interior was completely redone last year, with the goal of making it appear factory stock. Doug’s put in new floor pans, sound deadener, carpet, and mats. The new seat covers for the front buckets took over a year to find. The Super Bee did come with shoulder belts from Dodge, but Doug’s replaced them with aftermarket items that are stronger and easier to use.

When I asked Doug if the Bee had air conditioning, he said, “I wish. That’s why I drive it until about 3 o’clock in the afternoon and then go home and get in the boat.”

And drive it he does. Doug cruises his Dodge in and around the mountains of North Georgia and the Carolinas every weekend.

Doug’s Mopar got a lot of attention while he and I talked at the Rods, Ribs, & Ribbons car show. As well it should. He’s taken a classic muscle car, superbly restored it, and enjoys taking it out on the road.

Doug and his Super Bee have earned every bit of that attention.