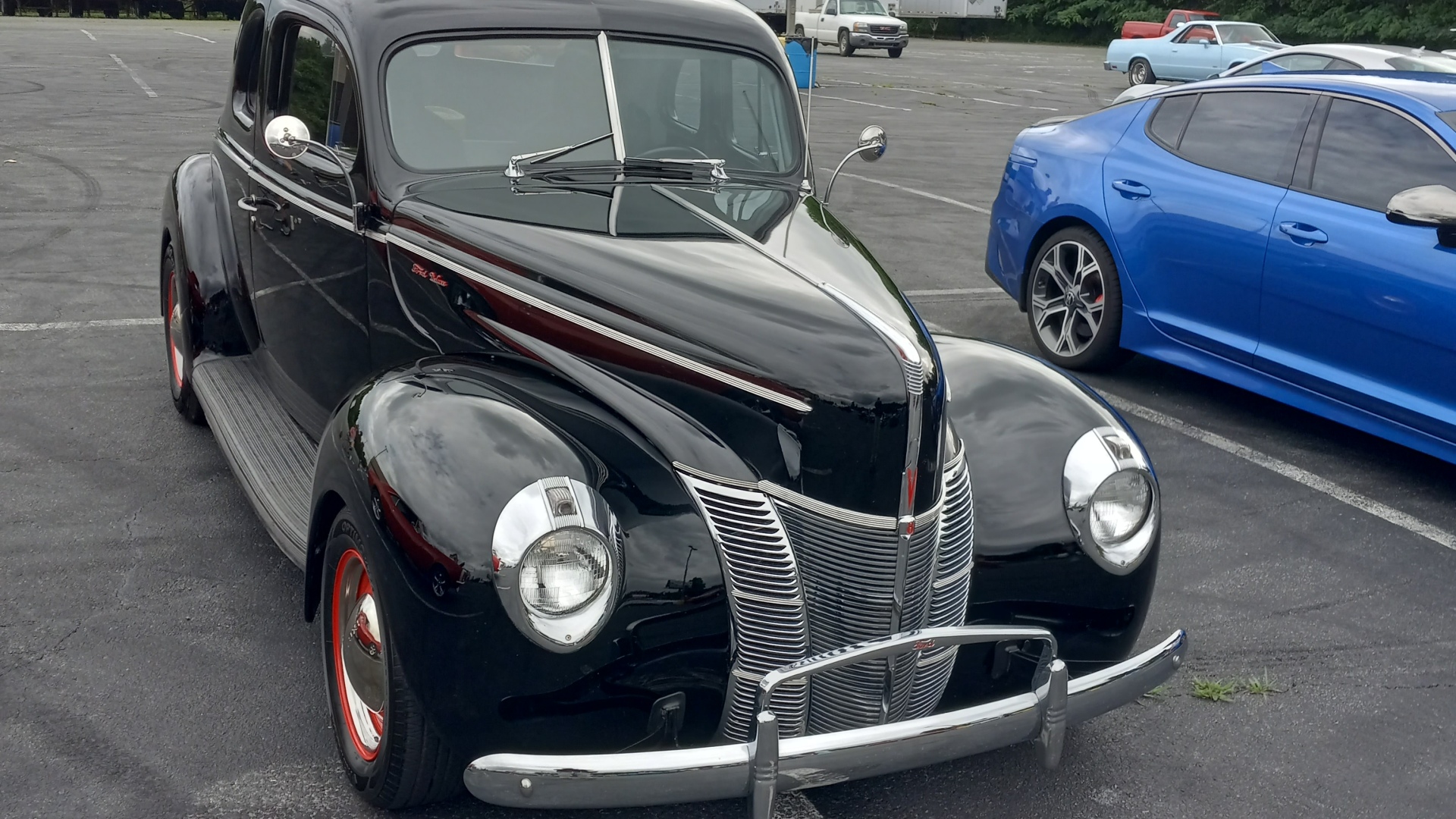 John said the Coupe was in “fair shape” when he got it. But it wasn’t where he wanted it, so he started a pretty complete rebuild about six years ago. Just about everything came off the car – the fenders, front end, trunk, engine, and transmission all came out.

A complete Mustang II front end was installed, including steering, springs, and disc brakes. Mustang II front ends have been a popular hot rodding swap and John says there’s good reasons. He says the suspension is easy to find, affordable, and makes for a good front end. John did change the bolt pattern on the hubs to a 5-bolt pattern to match the rear end.

The Ford is powered by a 350 Chevrolet small block from a 1978 Corvette. John has reworked the heads, installed a slightly hotter cam, and upgraded to an electronic ignition. The small block breathes in through a Holley 650 four-barrel carb and breathes out through the famous Chevy Ram Horn exhaust manifolds and a dual exhaust.

The SBC drives a 700R4 four-speed automatic transmission that came from a 1991 Cadillac Deville. John told me the trans bolted up to the Corvette engine without much problem, but mounting it to the ‘40 Ford chassis required cutting the frame, and then welding in some supports and plates to keep everything in line. A homemade driveshaft connects the trans to the Ford 9-inch rear end.

John’s running 225/15 tires on the back and 205/15 up front. Power steering and power brakes make the Ford a breeze to drive. He had the steelie wheels powder coated to match the red highlights on the original Deluxe name badges on the front fenders.

Back when he started hot rodding in the 60s, John acknowledged that changing the exterior looks of cars by things like shaving chrome trim was a popular choice. But that’s not what he wants to do now. “I wanted to keep it as original looking as I could,” he told me.

That’s why he matched the wheels to the name badges, and it’s why he obtained reproduction bumpers licensed by Ford – even though, he said, “you pay a little extra money for that.”

And also to that end, the body of the Coupe is pretty much like Ford made it. One change John made was to extend the chrome on the grill. The grill’s side vents were originally painted the same black as the body of the car, but John likes the wider look.

The interior has been fairly extensively redone, but John’s goals were for it to be “neat and simple.” The seats are from a 2002 Mazda Miata. John built 6” tall custom brackets to mount the seats. The center console is from a Ford Windstar. A friend of John’s did the upholstery. Vintage Air air conditioning keeps the interior cool.

And the best part? John said he drives the Ford “all the time. It looks like an old car but drives like a new car.”

A true hot rodder, John has an appreciation for all types of cars. While we were talking at The Cruise-In car show in Burlington, North Carolina, there were cars and pickups from the 40s to the 60s nearby. John liked all of them.

His 1940 Ford Deluxe Coupe certainly has both.