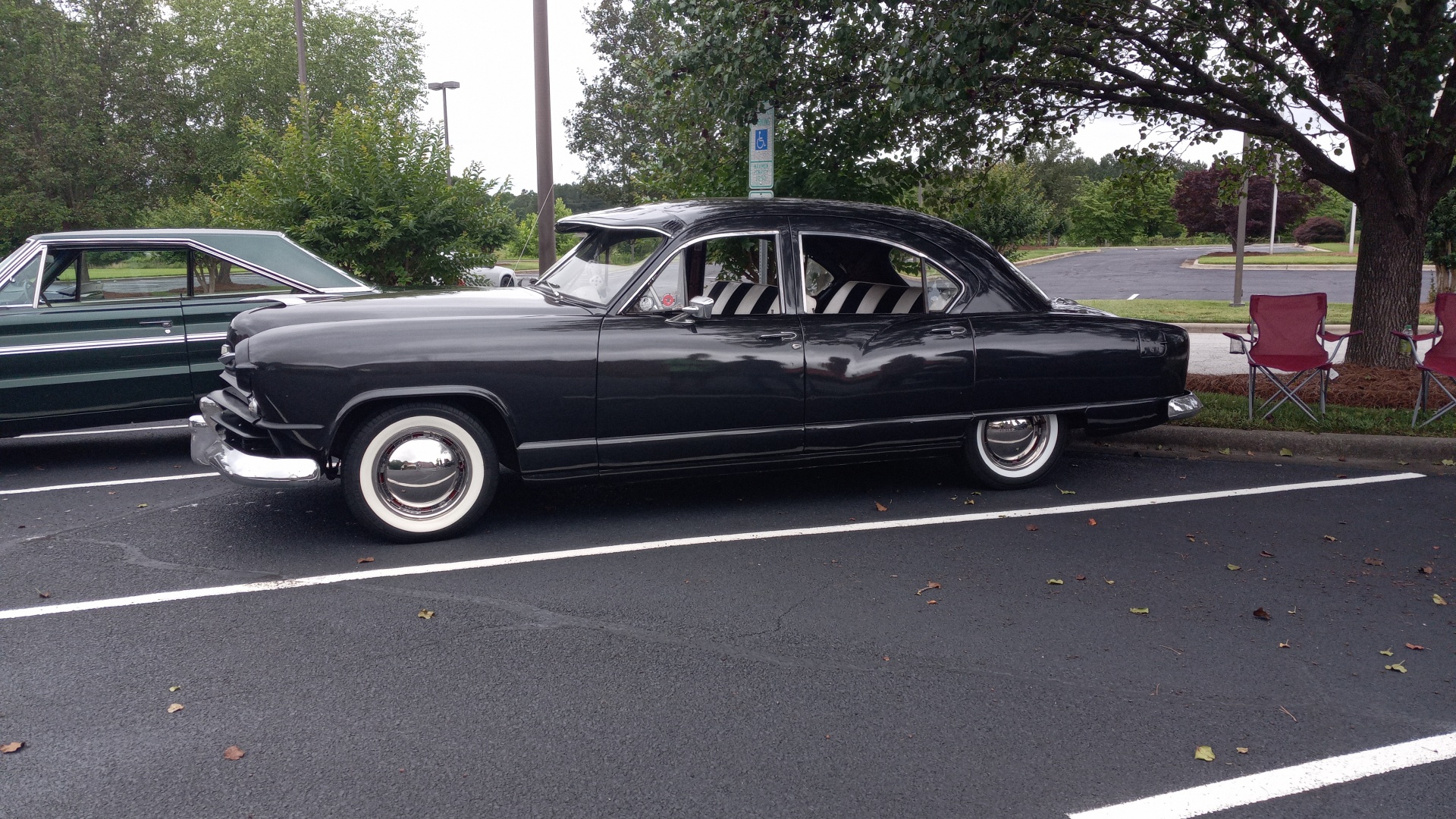 I was embarrassed. I was at the Park & Shine Carolina Cruise-In at Carolina Detail Supply in Thomasville, North Carolina. I was looking at this beautiful classic car and I had no idea what it was. When Charles Hunt told me, “It’s a 1951 Kaiser Deluxe,” I felt less embarrassed – and even more interested. I’d never seen a Kaiser before.

Charles acknowledged that even he, as a Kaiser owner, doesn’t see very many of them. “I’m on a Kaiser group on Facebook,” he said. “There’s a few of these up north, but I’ve never seen one anywhere close by. I’d never even heard of a Kaiser until I saw this. That’s kind of why I got it. It’s something different.”

There’s a good reason you don’t see a bunch of Kaisers at your local cruise in. The company wasn’t around very long. Kaiser Motors built cars from 1945 to 1953. Then in 1953, Kaiser merged with Willys. In 1963 they changed their name to Kaiser Jeep Corporation. Eventually, the company sold the automotive part of their business to American Motors. For hot rodders, the Henry J, which became a classic gasser drag racer, is probably their most well known car. It was named after Henry J. Kaiser, the company president.

Charles got the Deluxe about a year ago. A friend of his, who was in the military, had it, and sold it to Charles when he shipped off from Camp Lejeune for his tour of duty in Iraq.

Charles’ friend was originally from California, and the Deluxe is also from California, having spent its entire life there before coming to North Carolina. As a result, the Deluxe has no rust underneath. Interestingly, it was also never equipped with heat or air conditioning. “It’s never too hot or too cold in California,” Charles said, “so why would you want them?”

Amazingly, the Deluxe has only 40,000 original miles on it. And Charles has kept just about everything completely stock. “All I’ve done was fix old worn out parts to keep it running,” he said. “Suspension parts, struts, shocks, shims here and there.”

The original flathead six cylinder engine is still under the hood and runs perfectly. Charles sat behind the wheel, barely bumped the starter, and it immediately sprang to life and idled quietly. The 226 cubic inch engine was rated at 115 horsepower from the factory. Charles has kept it entirely stock, including the single barrel carburetor and the points and condenser ignition, but the factory generator has been converted to an alternator. “It’s a basic, easy to work on motor,” he said.

There’s a three-speed manual transmission with a classic three on the tree shifter for Charles to pick his gears. The shifting mechanism was his latest project, as it started locking up on him. There’s a small box in the mechanism that houses two forked shift rods that are activated by a gear tooth inside the box. Turns out the tooth had jumped out of place. An explosion of springs greeted Charles when he opened the box up, but it turned out to be a simple fix and he got it working again.

There’s a simple, straight forward suspension on the Deluxe. It’s got manual steering and manual brakes. There are coil springs and A-arms up front, and a solid axle rear end on leaf springs out back. One pretty advanced feature for the early 50s is that the Kaiser has sway bars. Charles reports the ride and the handling are excellent. However, he does say that the four wheel drum brakes are “tricky.”

The interior is very stock. The only exceptions are the black suede and leather on the seats and the Cadillac horn button. The steering wheel itself is original, but Charles had to replace the button. As is required on all early 50s hot rods, Charles has a pair of fuzzy dice hanging from the rear view mirror. And check out that 40,000 mile odometer. Amazing.

Charles hasn’t done anything to the body since he obtained the Kaiser. The paint is in good shape. That very fancy windshield visor only came on the Deluxe models. And the styling is absolutely gorgeous. The body lines on this car are stunning.

The Deluxe is on the road regularly – Charles drives it several times per week. With an all-steel body, and just over 100 horsepower, the Kaiser isn’t going to set many records at the drag strip, but it’s a great cruiser. “You’re not in a rush to go anywhere in this car,” he said. “You’re not going to go down the highway at 70 mph, but you can roll at 60.”

I was surprised when Charles told me that drivetrain parts aren’t too hard to find. That may be a result of the Kaiser company merging with Willys, and then Jeep for several years. But body parts? “Good luck,” was all he said.

Charles loves the uniqueness of his Deluxe. “They’re cars that you just don’t see anywhere,” he said. “There’s nothing really special about it, it’s just a rare car that caught my attention.”

I’m going to have to disagree with Charles on that. His Kaiser Deluxe is very special.