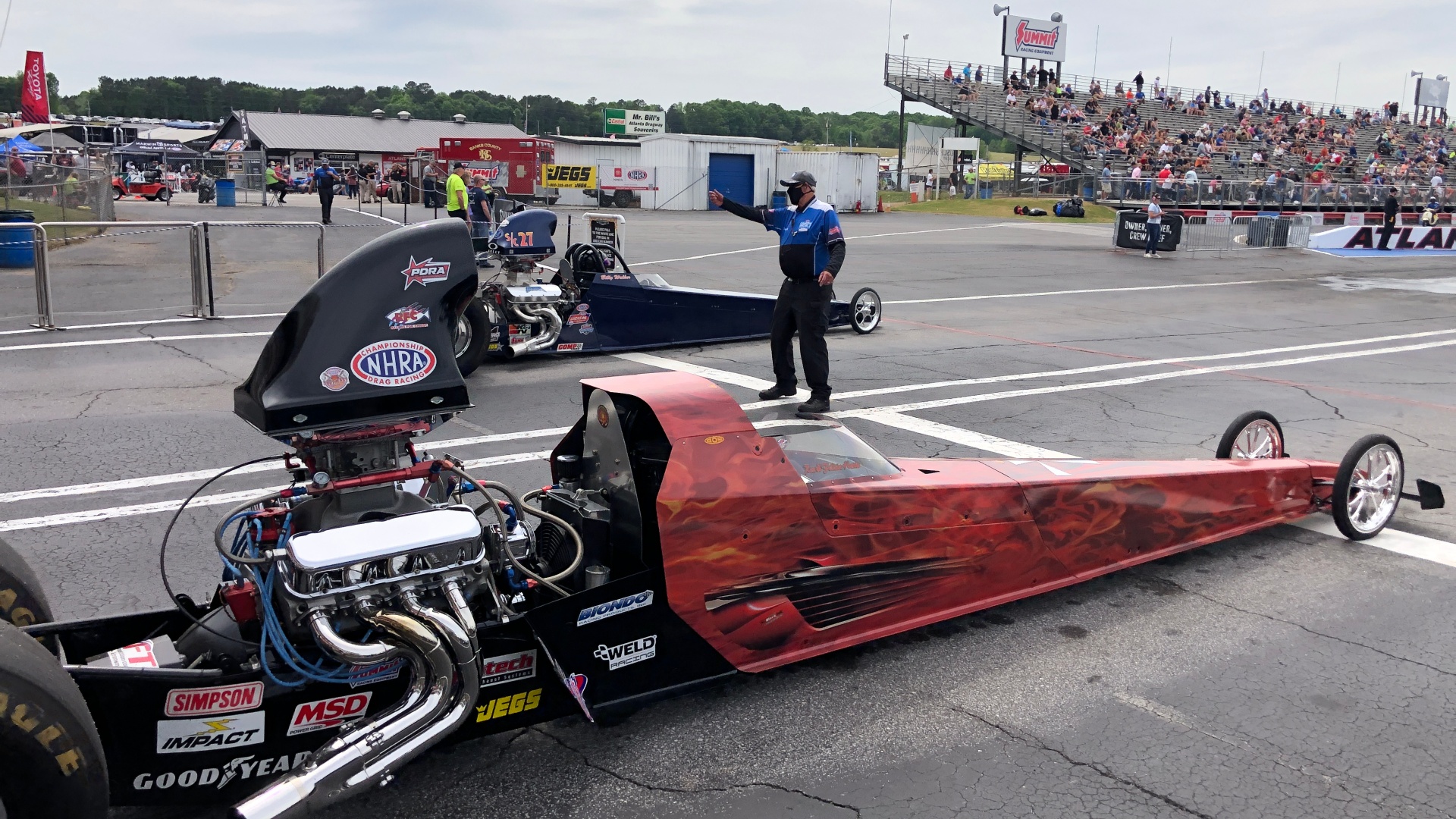 Hot rodding and drag racing have been intertwined since well, basically forever. So it’s not surprising that there are a whole buncha really great hot rods at the NHRA Southern Nationals in Commerce, Georgia this weekend.

I thought GHR readers would enjoy taking a look at a few of the hundreds of great race cars here at Atlanta Dragway. One thing I love about drag racing is the wide variety of hot rods that compete in the sport. Where else are you going to get a 4-cylinder Ford Ranger racing against a 1968 big block Camaro?

Could there be a more classic example of the full body drag car than a first generation Camaro? Ron’s ‘68 SS keeps that tradition going.

Ron’s been racing since the early 80s, and had himself quite a summer in 1989. He won his first NHRA national event, Le Grandnationals, in Montreal that year, and followed it up with his second win at the very next event, the Summernationals at Raceway Park in Englishtown, N.J.

Ron is based out of Virginia now, but he used to live in New Jersey and that’s where he found out about his Camaro. A friend told him about it and he drove out to Nebraska to buy it – sight unseen.

It’s an original big block car that had only 1300 street miles. Ron’s got a 396 in it, rated by NHRA at 325 horsepower. As you can tell from it’s F/SA class designation (the A stands for automatic), it’s got a TurboHydromatic 3-speed in it.

As the name implies, the Stock class in NHRA doesn’t allow many modifications. The heads are stock, with the slight competition valve job that’s allowed. Ron’s added an MSD electronic ignition and has 4.10 gears in the rear end.

The Camaro’s been running around 11.16 here in Georgia, which is a strong time against the 11.85 index for the class. But Ron’s run as quick as 10.80s when he’s not having to deal with the north Georgia humidity and elevation.

If you’re familiar with the front-wheel drive Pontiac Sunfires of the mid-90s, you’re probably surprised that Jeff’s Poncho pulls the front wheels off the ground when he leaves the starting line.

Maybe NHRA realized that the supply of 1960s muscle cars was running low, and they needed to get some more recent cars into the Stock and Super Stock classes. Several years ago*, they created the GT classes, which allowed the new batch of Detroit front-wheel drive cars to be converted to rear wheel drive. This is much more conducive to drag racing. And wheelies.

*Jeff’s dad was one of the two racers who initially debuted the GT class cars, and he did it right here at Atlanta Dragway.

The Sunfire was originally built for the old NHRA Modified Eliminator class, which is the class Jeff used to race in. Looking to simplify his racing program, he converted the Sunfire to the GT class and paired it with a 2015 Camaro he runs in Stock Eliminator. Both cars run the same GM COPO engine. As Jeff explained, “Now I just need one spare part for everything.” The Sunfire’s COPO displaces 350 cubic inches. (The engine shown in the picture above is the one in Jeff’s Camaro.)

Obviously converting a front-wheel drive car to rear wheel drive requires some significant chassis changes. Jeff’s Pontiac has front and rear subframes installed, connected under the floor pan, and on top by the multi-point roll cage.

And in case you’re wondering, sticking a high performance V8 into a subcompact car results in the Sunfire turning in ETs in the 8.80s at over 150 mph.

I used to race my Slant Six Plymouth Duster in W/S back in the day. So the W/SA class designation on Ellis’ Ranger caught my attention.

Ellis informed me that the rules have been changed and W/S and W/SA are now strictly for four-cylinder cars. And apparently the Buth family is really into four-cylinder W Stock cars because Ellis’ dad races a 4-speed Pinto station wagon in W/S.

The Ranger has a 140 cubic inch, fuel injected four banger mated to a C4 automatic. Ellis has put in a custom cam that complies with NHRA specs for overlap and duration while keeping the stock lift. He’s installed 21 pound fuel injectors on the intake. (By the way, Ellis is looking for a very-hard-to-find air box for the Ranger’s induction, so if you have one, let him know.)

Ellis has a 4900 stall speed torque converter and 5.71 gears in the rear end, so the Ranger launches pretty hard with 60’ times under two seconds. He’s played with various shift points, getting as high as 6800 rpm when he really goes after it. He’s settled on 6400 this weekend to take it a little easier on the drivetrain. The Ranger has run 15.4 second quarter-miles, and consistently runs 15.60s against the 16.65 class index.

Eric is a third-generation racer in the Campolito family, following his grandfather and his father Dave. And you might say the Caprice is a second generation drag car. Eric’s parents bought the car brand new in 1996 and used it to tow their 1984 Camaro to the track.

But Dave started checking out the NHRA car / engine combinations for Stock Eliminator and realized the Caprice would make a great racer. The transition from tow car to race car was completed in 2003.

Dave built the car, and had another friend drive it. But when Eric turned 16, he took over the controls. Initially, the race version of the Caprice had a 265 cubic inch engine, but Eric wanted something bigger so now it’s running a 350.

When he was talking with me, Eric was checking out the weather to make adjustments to his dial-in. He clearly knows what he’s doing in that regard because during qualifying, he posted a run just one hundredth of a second off his dial-in.

Chevrolet sold the Caprice as a luxury car, and Eric reports it’s a pretty luxurious race car as well. During a run, he just puts the stock shifter in Drive and hits the gas. The TurboHydromatic shifts automatically on the trips down the quarter-mile.

If you thought the only dragsters at an NHRA event were the 4.2 million horsepower Top Fuel dragsters (I may have exaggerated the horsepower slightly), you’d be wrong. There are several classes that feature dragsters, including Super Comp, which is where Ron is competing this weekend with his 2003 Mike Bos built ride.

Powered by a monster 590 cubic inch PAR aluminum racing engine, which puts out about 1200 horsepower (not exaggerated), the 8.90 Super Comp index is easy for Ron to hit. He also races the dragster in Top Dragster class and he can get down the 1320 in as little as 7.30 seconds. Like almost all the Super Comp racers, Ron uses a throttle stop to run as close to the index as possible, so he can just concentrate on cutting a good light at the starting line.

The dragster weights in at just 1950 pounds without Ron in it. Just looking at the rear engined machine, you can guess that most of the weight is towards the back. To help weight distribution a little bit, Ron’s mounted a larger (for a dragster) 5 gallon fuel tank towards the front of the chassis. Along with the wings mounted ahead of the front wheels, that helps keep some weight on the front wheels to improve steering control.

One other unique feature is that Ron runs methanol for his fuel. He says it keeps the engine temperature very consistent, so he doesn’t have to worry so much about weather changes. It requires an intake system designed for the fuel, and regular cleaning, but Ron likes the advantages.

That 1200 horsepower goes through an Abruzzi Racing Transmission two-speed Powerglide and 4.10 gears in the rear end. The Powerglide is shifted electronically, and Ron is currently using a chip that shifts at 5200 rpm. He leaves the line at 4500 rpm for Super Comp, and 5500 in Top Dragster.

The dragster’s gorgeous full-length flame paint job is… not a paint job. It’s a wrap designed by the creative folks at Black Ink in Conyers, Georgia.

Driving a dragster to a sub 9-second quarter-mile time at about 170 mph seems like a daunting task to me, but Ron finds it pretty easy. He started racing go-karts when he was seven years old, and he likens the low stance of the dragster to the carts he grew up driving.

At this time, Ron’s focus is on getting his race operations as problem free as possible. “The older I get,” he told me, “the less work I want to do. I just put fuel in and run it.”

One Reply to “Hot Rods of the NHRA Southern Nationals”