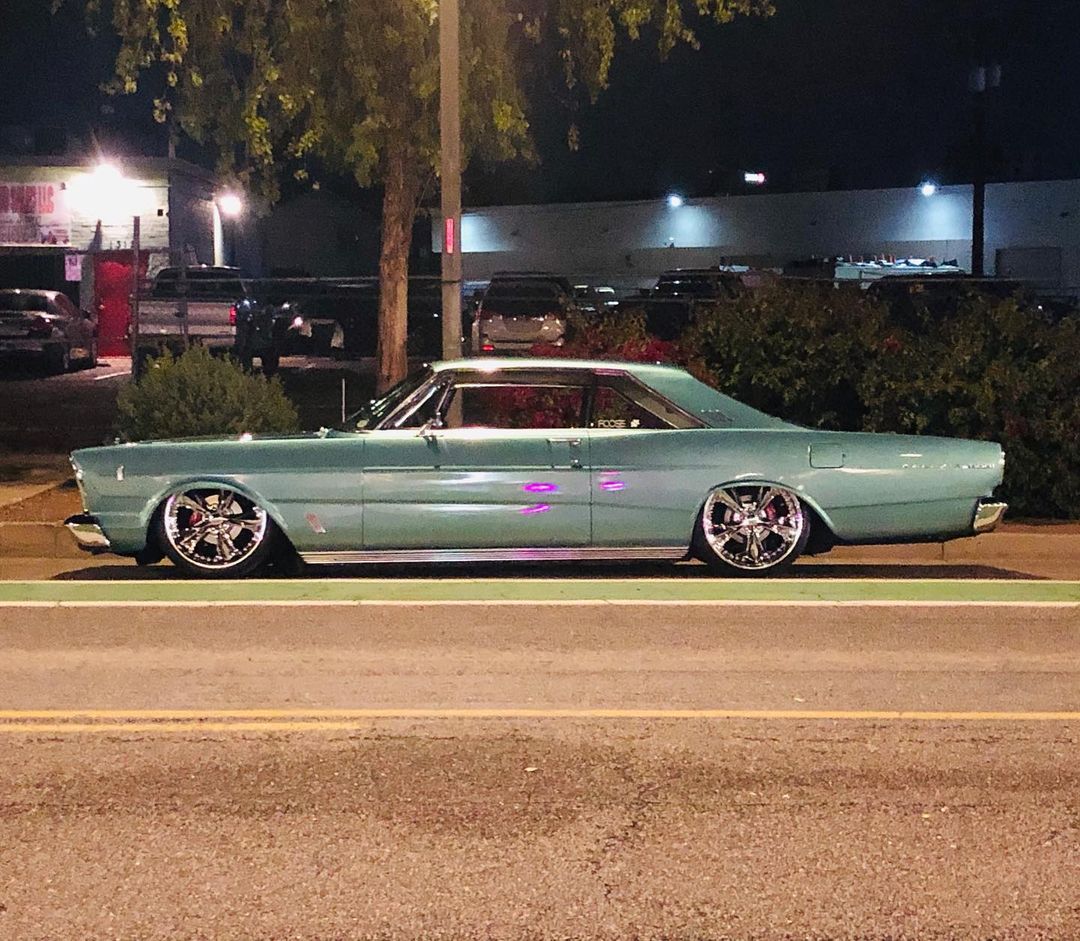 Through Garage Hot Rods I’ve been lucky enough to talk with hot rodders all around the world. When Victor Badoino talked with me about his beautiful 1966 Ford Galaxie, he was on top of the world.

When we spoke, Victor was working in Deadhorse, Alaska, which is above the Arctic Circle. That day, it was a balmy -22 degrees with a -37 degree windchill. Just a few days earlier, it was -49 with a windchill of -125.

I’m happy to report that Victor works inside while he’s in Deadhorse (he works with on-shore oil rigs) and that he, his wife Janine, his son Lorenzo, and the Galaxie live in Arizona.

Victor’s always been a Ford guy. He started working at Ford dealerships in 1999, and then for the corporation itself where he helped dealers make the transition from microfiche to computer-based systems.

He found the Galaxie in 2004 on Auto Trader magazine. Unlike today’s Internet ads, Auto Trader had just one picture of the car, a “bumper picture” as Victor described it. It was for sale in a nearby retirement community. And the buying process wasn’t easy.

“Retirement community residents don’t like people,” Victor recalled. “They don’t answer their phone – you have to actually go by there. They thought I wanted to buy a golf cart.”

The original owner still had the Galaxie and it was in good condition, with white paint and the stock dark green interior. It had a 390 FE big block, C6 automatic transmission and a set of 8 hole “trailer” wheels. Victor drove it home for $5500.

The first thing Victor wanted to address was the body color. He really wanted to paint the car 2005 Thunderbird Green, but that paint was really expensive. Like $1000 per quart expensive. So Victor went with 1990 Honda Teal Green, which was available for the much more reasonable $150 per gallon.

Not much else needed to be done to the body. Victor rechromed both bumpers and polished the grill. He also removed the chrome trim around the wheel wells and rear quarter panels, but kept it on the lower body panel between the front and rear wheels.

The next items on the Galaxie’s to do list were wheels and stance. For the stance, Victor followed some tips from the popular Overhaulin’ TV show.

A lot of people heat coil springs to lower their cars, but Overhaulin’ recommended cutting half a coil off and then waiting several weeks for the spring to settle. Victor ended up cutting half a coil in back and a full coil in front. The resulting stance was exactly what he wanted for his Ford.

For the wheels, Victor was determined to get 20-inch Foose Nitrous wheels.

“Man were they expensive,” he said, “$1000 each for the rear and $600 each for the front. I put them on my credit card because I had to have them. It took about 10 years to pay them off.” And they turned out to be a great investment. “I’m so proud of them,” he said. “They still look great.”

Victor always had in mind that he wanted two looks for the Galaxie – a classic hot rod look and a custom lowrider look. The wide Foose wheels and fat tires give him the hot rod look. He achieves the lowrider look with a second set of 15” Allied Supreme wheels and thin white wall tires.

Public opinion seems to favor the latter. “Everyone loves that car with skinny whites and 15″ Supremes,” he said. “It blows up on Instagram everytime I do it.”

When Victor turned his attention to the engine, he took it completely apart and was happy to see it was in great shape. He resealed it and painted it to match the body color, which was not a popular idea in 2004. Victor told me he got a lot of grief for that decision. Lots of people told him he should leave it Ford blue. The results confirm that he made the right choice.

The FE big block has been hopped up with several Edelbrock components. An aluminum intake manifold replaced the 70 pound (!) stock unit, and has a 650 cfm four barrel on top. Victor’s also got an Edelbrock water pump, cam, and headers on the 390. A Ron Davis custom radiator keeps the engine cool, but the heat of the Arizona summers will still get the temperature up around 220 degrees.

The interior was reworked by a local craftsman in Arizona, who freshened up the bench seat, carpet, and door panels, still in green. That was intended to be a temporary holdover until a custom interior was completed, but it’s still there. Victor recently replaced the stock dashboard and controls with a complete Dakota Digital unit and custom switches he installed under the dash. The picture on the right shows his dash before and after the swap.

One unique feature of the Galaxie is the radio delete panel in the dash. This is a panel with the Ford logo that’s installed in place of the radio. What’s unique is that Victor can’t find any Ford documentation that shows a radio delete being available for a Galaxie. The fact that his car has a factory radio antenna bears this out. He suspects the original owner got this one out of a Fairlane.

With those modifications, Victor drove the Galaxie around Arizona for about 10 years, saving money for his next step. “I wanted to put an air ride suspension on it,” he said.

First up was an Accuair front suspension. Six months later Victor added dropped front spindles from Fat Man Fabrications and 11″ Wilwood disk brakes – first up front and later in the rear as well. He used that size of disks so that he could continue to use his 15” wheels as well as the 20” Nitrous set.

And now? “I drive the hell out of it,” Victor told me.

With air conditioning, power steering, and tall 3.00 gears in the Ford 9” rearend, the Galaxie is a pleasure for Victor, Janine, and Lorenzo to go cruising in.

“I can go 70 mph all day,” Victor reports. “It drives super nice with the 15s on it. Just amazing. It’s a big steering wheel, big boat driving car. It’s just a cruiser.”

And the Badoinos drive it a lot. The Galaxie had only 70,000 miles on it when Victor got it. It has 120,000 miles on it now. This car is no trailer queen. As Victor said, “If you ever see my car on a trailer, call the police because that means it’s been stolen.”

“When we’re home, we’re a hot rod family,” Victor said. “We go to car shows as much as we can. My wife has a 55 Thunderbird that she takes.”

There may be some more mods in store for the Galaxie in the future. Hotchkis recently introduced a suspension kit for it, and Victor would like a sportier ride. And he wouldn’t mind having a Coyote motor – “if I’m daydreaming” he said.

But in the meantime, he’s loving the Galaxie just as it is, cruising with his family.

One Reply to “Victor Badoino’s ’66 Galaxie”