“The week I got it,” Jason Stewart told me about his 1993 Mustang hatchback, “I was trying to decide what I wanted to do. Do I leave it stock, or do I hot rod it? I went hot rod.”

That was just four months ago, and Jason’s done a whole lotta hot rodding since then. “I’ve worked my butt off on it,” he said. He’s tweaked the engine, drivetrain, suspension, brakes, and even the paint. And there’s more to come. 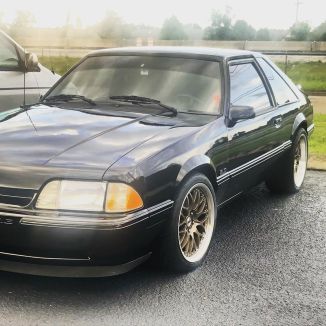 Jason’s a big Mustang fan. “Right out of high school I had 3 or 4 of them,” he told me. “When I got married, we both had one. We went to Mustang Week in Bowling Green for our honeymoon.”

Then, like happened for a lot of us, hot rods took a back seat to other things. “I got out of it for a little bit,” he said, “but I wanted something else to play with, so I got this one.”

It was in good shape – Jason says the interior was almost perfect – but the first thing he wanted to address was the paint. The car had previously been repainted because the clear coat was coming off. Unfortunately, it had a terrible paint job. When Jason got it, it was nothing but orange peel.

He got a quote for a complete re-do, which included taking it down to bare metal, but it was more than Jason wanted to spend. Jason decided he’d try to wet sand it. Four days of wet sanding, and another week and a half of buffing, has the black paint looking “100 times better” in Jason’s estimation. And you can see from the before and after pictures above that he’s correct.

The short block was in good shape. “The pistons, rods, crank… Everything looked almost brand new when I took it apart,” Jason said. The only modification that had been done to the engine previously was the installation of a Ford Motorsports B303 hydraulic roller camshaft and he left that in place. 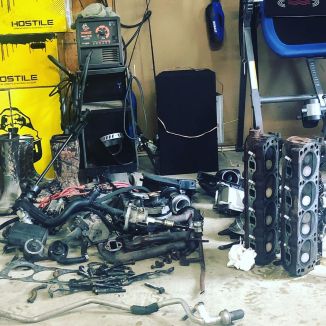 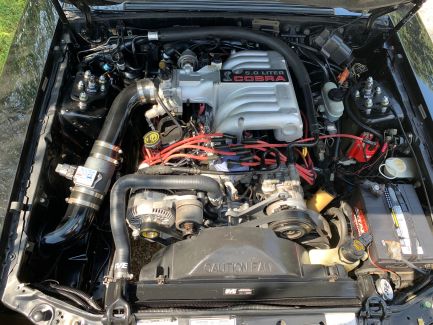 Jason bolted on a pair of TrickFlow Twisted Wedge heads, a Cobra intake manifold (upper and lower), and upsized the throttle body and mass air flow sensors. To keep up with the fuel demands, he also installed larger 24 pound injectors and an Aeromotive 240 gph fuel pump and an adjustable fuel pressure regulator.

That intake system might be more than the 5.0 needs right now but he chose those components with an eye to the future.

“I’m trying to decide to go with a blower or a turbo later,” he told me. “I’m probably going to go with the blower. I can’t decide if I want to do the Kenne Bell style or the Vortec. That’s my dilemma. That and saving up funds. I’ve dumped a lot of money into this car really quick.”

With such a stout intake, Jason had to upgrade the exhaust to keep up. A pair of BBK shorty headers feed 3” pipes with a MAC Pro Chamber. Jason estimates his motor work has added about 150 horsepower to the small block. 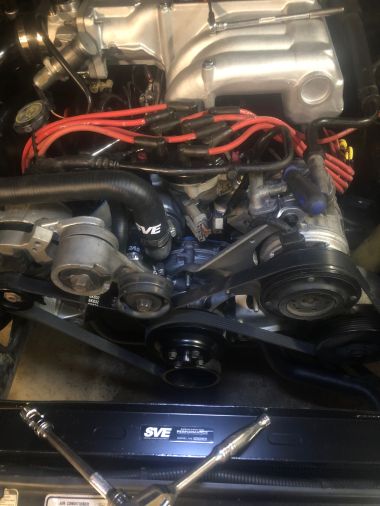 Almost everything on the front end of the motor is new. Jason’s installed a new water pump, 130 amp alternator, and a three-row SVE radiator. The stock fan is on there for now, but will be swapped out for electric fans in the near future.

The original T-5 five-speed transmission is now turning an aluminum driveshaft, which shaved off about 25 pounds as compared to the stock shaft. Jason reports the difference is dramatic. The stock solid axle rear end is still in there, with the factory 3.27 gears. It’s supported by adjustable upper and lower control arms Jason’s installed. 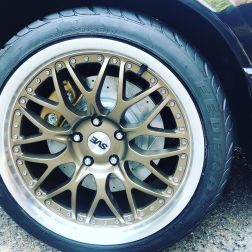 A Mach 1 chin spoiler on the front completes the look Jason was after. It’s hard to believe the Mustang started life as an LX model. Some other details Jason’s attended to include a new center console and hood struts to replace the factory prop rod.

With the added horsepower and a tricked out suspension, Jason reports the Ford is a blast to drive. “Yeah, it’s super fun,” he said. “It feels like a road race car.” 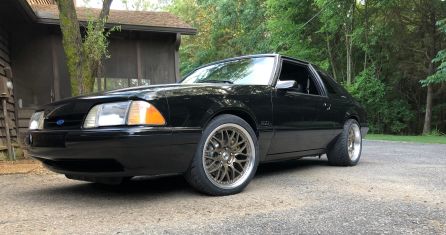 It may feel like a road racer, but the Mustang’s also been to the drag strip. Jason had to battle a quirky ignition and a bunch of tire spin, but still managed to run 7.93 in the eighth-mile. That converts to a solid mid to low 12 second run for a quarter-mile.

Future plans call for that supercharger, along with a beefier transmission – either a built up T-5 or a T-56, and steeper gears in the rear end, probably 3.73s.

He’s not going crazy on those rear end gears because he says, “It’s going to be a driver.” That already includes planned trips this year to Bowling Green, Kentucky for the Mustang Shootout and to North Carolina for Mustang Week later this year.

In retrospect, leaving his Mustang stock probably wasn’t much of an option for Jason. We’re all glad he went hot rod.

One Reply to “Jason Stewart’s ’93 Mustang”