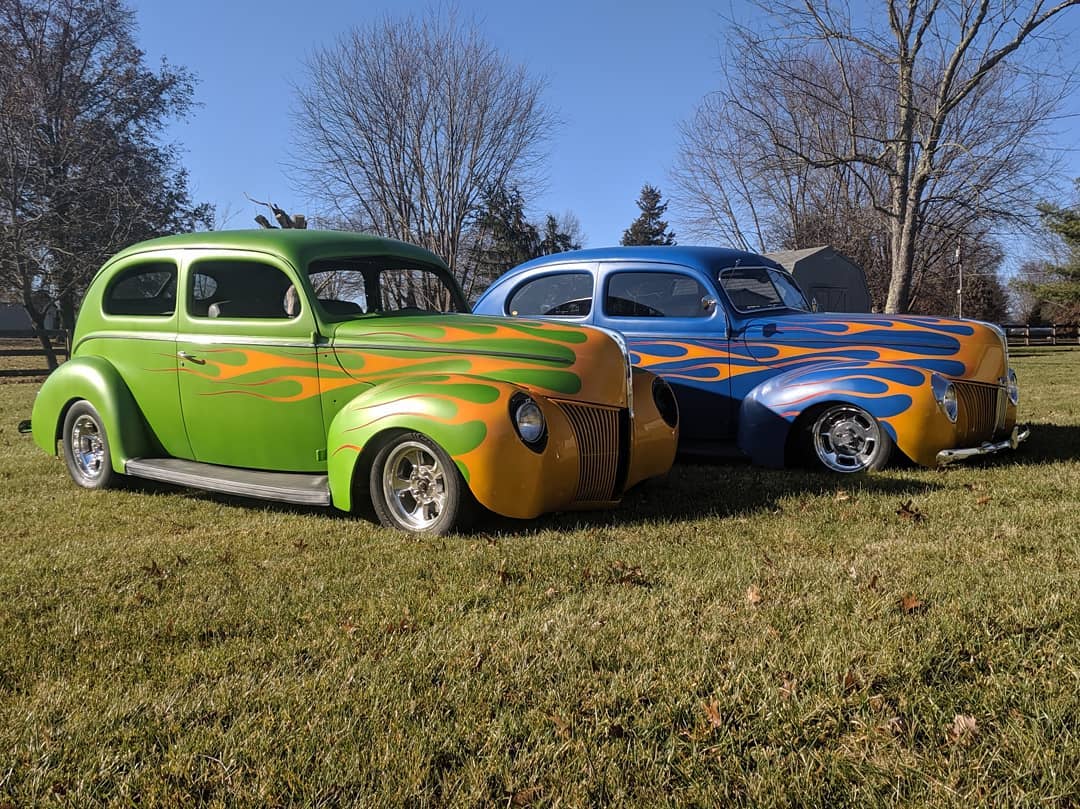 Robbie Baker’s grandmother owned a ceramic shop. His grandpa ran a junkyard. His playhouse growing up was a Freightliner cabover. And his dad Doug has always been a hot rodder.

All of that factors into the two gorgeous Ford Sedans, one a ‘39 and one a ‘40, Robbie and Doug are driving around Ohio.

Robbie drives the blue 1939 Deluxe. He got it five years ago. “I found it on Craig’s List,” he told me. “It was running, but pretty bare bones. Slowly over the next 3-4 years, I started personalizing it – making it the way I wanted.”

The work started with replacing the motor and transmission. Robbie installed a 355 cubic inch small block Chevy, mated to TH-200-4R automatic. A Ford 9” rear end with Positraction and 3.55 gears completes the drivetrain.

The suspension features a drop axle up front located by Fatman Fabrication front springs. Robbie’s using the stock Ford wishbones, but he did have to notch the frame to give the wishbones enough clearance to get the front end as low as he wanted.

The rear axle is held in place with Fatman leaf springs. The Sedan has Wilwood disks up front and drum brakes in the rear. There are sway bars at both ends. Robbie’s Sedan sports genuine Halibrand ET mags at all four corners.

The ‘39’s interior was in rough shape when he got it. Robbie put down insulation and new carpet. He modified front seats from a 2018 Ford Fusion seats, with power adjustment and seat heaters, to fit. He also narrowed the bolsters on the rear seat about 2 1/2 inches on each side, and added a center armrest and cup holders so his two daughters would be comfortable on their frequent family outings. 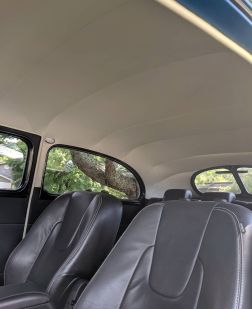 The Sedan’s got the stock 1939 dash and 4- spoke steering wheel on a straight column. Robbie built a custom console to house the radio and heater and air conditioning controls. A friend covered the door panels and installed an ivory headliner to match the stitching on the seats.

“I wanted something that we could just get in and drive and enjoy,” Robbie said. “It has a late model feel. It’s definitely comfortable.”

Doug has been into hot rodding his whole life, and was the primary inspiration for Robbie to take up the sport. “We grew up on a little horse farm in the country,” Robbie told me. “My mom and brother and I played with the horses, but Dad and I were more into the cars.”

When Robbie’s ‘39 was complete, Doug really liked it. He asked Robbie if he’d be willing to have twin cars.

So Doug sold the 1948 Ford truck he had been customizing and bought a 1940 Standard Sedan from a widow whose husband hadn’t finished it. Doug and Robbie bought the Sedan home and went to work. 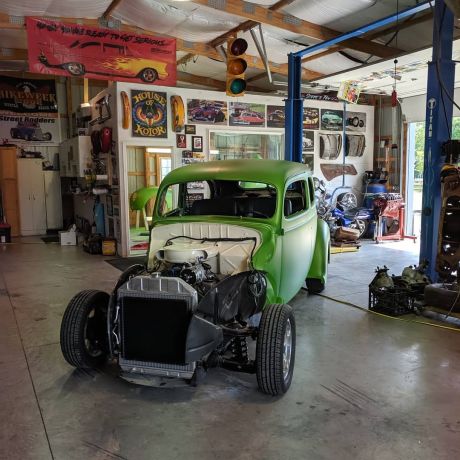 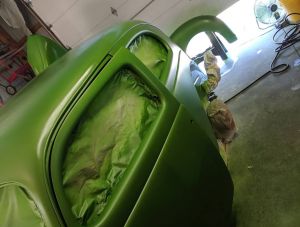 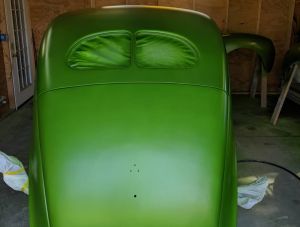 Doug’s Sedan is all Ford. He’s running the 351 Cleveland engine and overdrive automatic transmission that came with the car when he bought it. Like Robbie’s, it too has a Ford 9-inch rear end. The ‘40 has a Mustang II front suspension and features American Racing mags.

The interior is still in progress – in fact Doug was working on it the day Robbie and I talked. The original 1940 dash is still in place. It has power Cadillac bucket seats, and the back seat has been updated to match the buckets. It will have the same headliner and door panels as the ‘39.

Although Robbie’s Sedan is blue and Doug’s is green, the Bakers tried to match them up as much as possible. The body trim, pinstripes on the decklids, and Southern California Timing Association license plate frames all match.

And then there’s the flames…

“Flames have always been my biggest calling,” Robbie told me.

This is where his grandmother’s ceramics shop and the Frieghtliner cabover come into play. Robbie grew up constantly surrounded by art and cars.

“I’d go out every spring and bust the mud dauber nest out of the Frieghtliner and clean it up and that was my playhouse. Then I’d go up to Grandma’s ceramic shop and paint ceramics for a while and then I’d go back to the cabover and hangout. It really just got embedded in me from a very young age. Cars and art were just part of the family.”

When Robbie was a teenager, Doug owned a 1939 Ford hot rod. Robbie and his friends had painted several cars using just Krylon spray cans. The cars looked good enough that Doug said to Robbie, “Your uncle’s a painter. If he teaches you how to work a paint gun do you think you can flame the ‘40?” Robbie said he thought he could. “I did and it turned out really cool,” he said.

And that started Robbie’s side business of painting flames on things. Like pretty much anything. Coffee mugs. Toilet seats. Cabinetry. Even a fire extinguisher. (I have to admit I’m having a hard time wrapping my head around a flamed fire extinguisher.) 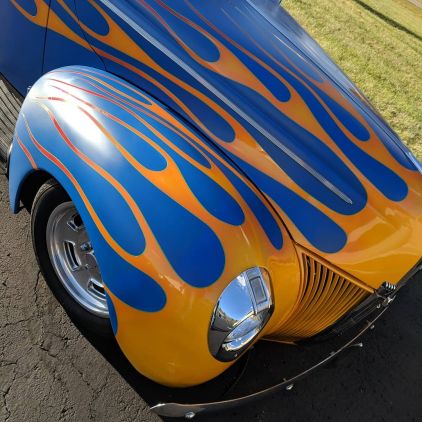 He doesn’t just paint flames. He also does custom painting of cars and motorcycles and pinstriping. He did all the painting for both Sedans.

His freehand flame method is amazing to me. “I balance them,” he told me. “If I’ve got three tips tailing off on the quarter panels on the driver’s side, I’ll make sure I’ve got the same balance on the passenger side.”

But the Ford Sedans were Robbie’s first time trying to paint a matched set of flames on two cars.

“When I did Dad’s, I literally just used a ruler and a grease pencil, and would measure where each cup was, where each tip was. I would make several dots throughout and just connected the dots.” The flames on Doug’s green car are outlined in blue to go with Robbie’s which are outlined in green on his blue car. You can really see the pinstriping effect in the in-progress picture of Doug’s hood shown below. The passenger side had been outlined but the driver’s side not completed yet. 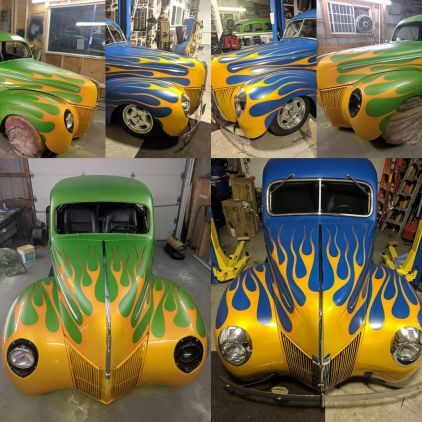 As spectacular as both Sedans are, Robbie was emphatic when he said, “I did not want to make them so damn nice that I couldn’t just hop in it and go somewhere and enjoy it. Both are built to drive. 100%. Shows are great but we’d rather just get in them and cruise to the local burger joint. If I get a paint chip, I’ll touch it up later.”

Robbie, Doug, and the entire Baker family (including the dogs) don’t take a single cruise for granted. Doug’s a five year survivor of lung cancer. Earlier this year, a tornado hit Doug’s neighborhood and did extensive damage. Luckily their house was not damaged, and no one in the family was hurt. The garage where Doug keeps his Sedan was totally destroyed, but amazingly the car was out at a glass shop getting some windows replaced and escaped damage. 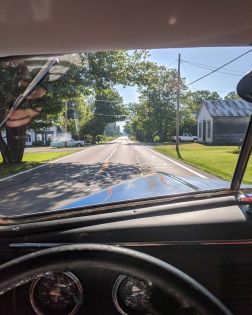 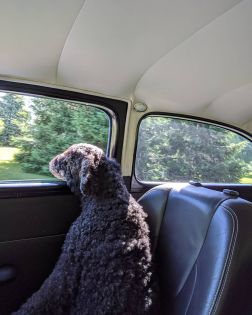 Robbie’s got some other projects going, including a T-Bucket, a Tall T Coupe (with a 429 Caddy motor) and a ghost-flamed 1973 Winnebago he’s converting to be a car hauler. I asked him if he had any future plans for the Sedans.

“Other than racking the miles up on them, not really. I can’t think of anything that I’m going to do to mine or Dad’s. The goal is for him and I to enjoy them as long as we can.”

I can’t think of a better legacy for two classic hot rods.