“One of my biggest goals is to be able to bring hot rodding to light for my generation,” 20-year-old Noah Norwood told me. “I hope I spark an interest and keep it going.”

Initially, The Hot Rod Kid was a nickname Noah got from his neighbor Gary Emory as a way for Noah to introduce himself when he started attending car shows a few years ago. But it’s become a lot more than just a nickname. It’s what Noah does. He builds hot rods.

It started when Noah was just two. His dad Tom had a 1951 GMC Five Window pickup that got Noah interested in classic cars, as you can see below. When he was 14 his dad started to get Noah involved with working on cars. “Ever since then,” Noah told me, “it’s been an ever-evolving obsession.” 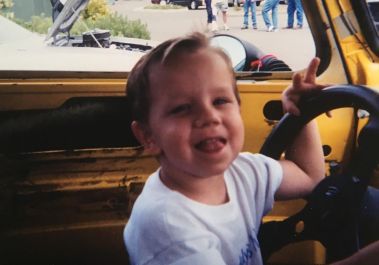 The Fridge came into Noah’s life during his senior year in high school. It was his daily driver that entire year. At that time it was a rusty reddish color with lots of bondo.

Noah’s first project was to sand it down and paint it Satin Blue. He left some imperfections on there – leaving it “kind of blotchy” in his words – to keep an aged look.

Underneath, the Fridge has the original leaf spring suspension both front and rear. A 289 small block from a ‘65 Mustang powers the Ford-o-Matic automatic transmission. Noah reports that the 289 is getting a little tired, and he already has a 302 that he’s building to replace it, but for now, he said, ‘it gets me where I need to go.” 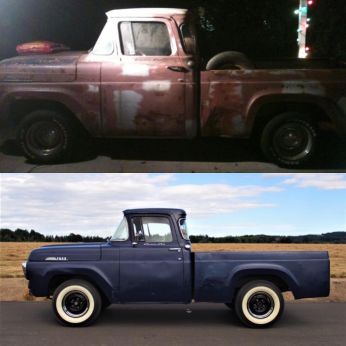 The interior was in rough shape. Noah said it had “horrible” red shag carpeting, a torn up seat from a Cougar, and cracked brown paint on the dash. He tore it all out.

Noah found a seat from a 1956 F-100 and reupholstered it. He laid down some black carpet, repainted the metal surfaces black, and installed a new steering wheel. A Johnny Law American shifter gives a traditional stick shift look to the Ford-o-Matic. Noah found the gauge panel on eBay and his pal Mark Jacobs put the great engine turned look on it. 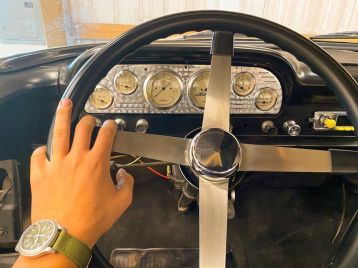 Noah is sharpening his hot rod skills on the Fridge, but first and foremost, it’s his shop truck. Noah drives it to the swap meets, and the Fridge regularly hauls sheet metal, welding tanks, plywood – anything Noah needs, including his surfboard.

And since it is his shop truck, it needed to have the Hot Rod Kid logo on it. But the logo had to look right on the Fridge. For that, Gary hooked Noah up with Rod Axtel. Rod, it turns out, painted logos while serving in Vietnam, so he was exactly the right guy for the job. That’s Rod with Noah in the picture below.

“The logo is absolutely amazing,” Noah said. “Rod made it look aged to match the patina on the rest of the truck. He knew exactly where to paint and where not to paint.”

With the logo looking so good, Noah took care of one other body detail that was bugging him. The Fridge didn’t come with a front bumper and the frame rails stuck out of the front of the truck. Noah cut off the front of the frame rails and filled in and blended the front valance with sheet metal he fitted to the holes. A little grinding and some more Satin Blue paint and Noah had created a smooth customized front end. 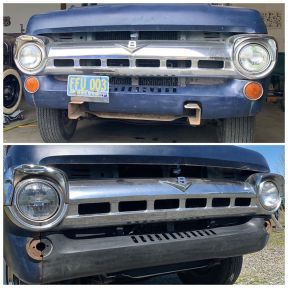 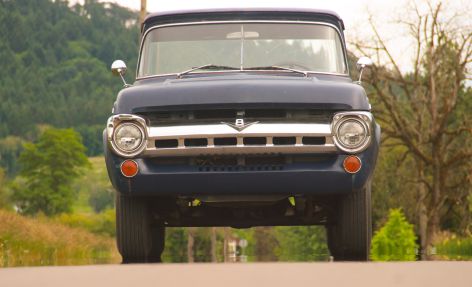 The Fridge shares Noah’s four bay shop with some spare engines (“It never hurts to have a few engines on hand,” Noah says.) and two other hot rod projects: a flathead-powered 1927 roadster pickup truck and a friend’s “Gas Ration Sedan” pickup.

The roadster was Gary’s and he sold it to Noah. It wasn’t a pickup originally, but Noah cut off the back end and installed the bed. 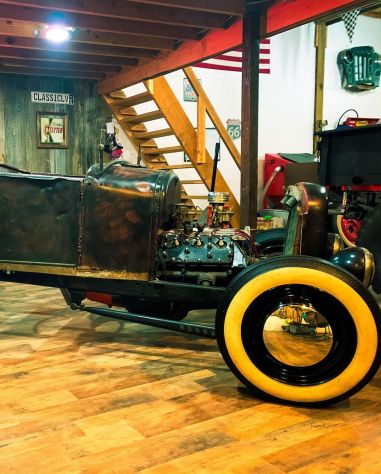 The Gas Ration Sedan had a similar transformation, but for a different reason. In 1943 when gas rationing was in place for World War II, you’d get more gas if you had a pickup. That’s why this sedan had the two back doors removed and was converted into a flatbed pickup. Noah is completing some sheet metal work on it.

The sedan is one example of how Noah is trying to build up his shop business. Right now he’s mostly working on friends’ cars, building his expertise, and advertising the results on Instagram. “I’m getting way more out of that,” he said, “and I have fun doing it.”

He’s already got a solid base of hot rodding knowledge, thanks to his dad and Gary.

“My dad really helped me with the mechanical knowledge,” Noah said, “engines and how cars work. Gary helped with an eye for design and traditional hot rods.”

Since he enjoys hot rodding so much, Noah wants to spread the sport to more folks in his generation. “In my opinion it’s not that there’s not an interest there,” he said, “but there just might not be the knowledge.”

And the Fridge is the perfect vehicle to help Noah spread that knowledge. 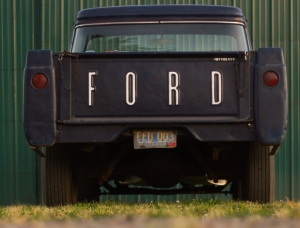 Photos courtesy of The Hot Rod Kid, Noah Norwood.
Click here to see more photos of  The Fridge.
You can follow Noah on Instagram at @the_hotrod_kid