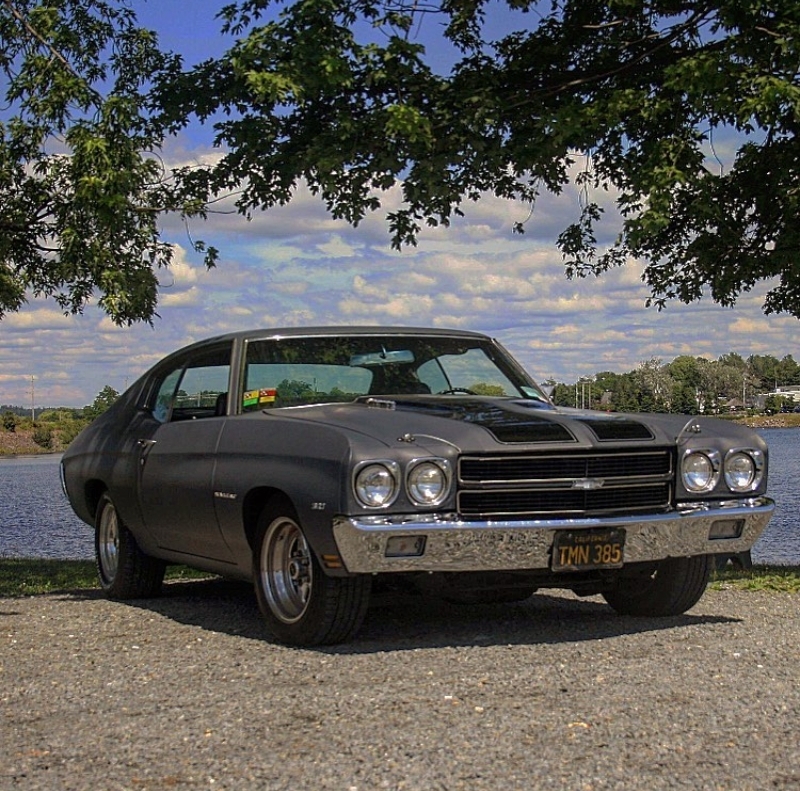 If anyone was ever born to be a hot rodder, Tyler Pickrem was.

And if anyone was ever born to hot rod a 1970 Chevelle, well… that’d also be Tyler.

His mom and dad’s first date was in a 1971 Chevelle. When he was two, his great uncle gave him a 1970 Chevelle Hot Wheels car (which Tyler still has).

“I grew up around cars,” Tyler told me. “For as long as I remember, I’ve loved them.”

Tyler and his sister Danielle grew up at the drag strip. His mom Jackie raced her 1969 Camaro – his dad Craig a ‘56 Chevy. Tyler and Danielle raced in Jr. Dragsters (that’s them getting prize money) until they were old enough to start driving the family’s D/SA – can you guess? – 1971 Chevelle.

So it’s no surprise that about 9 years ago, when he was just in 5th grade, Tyler and his dad started the father-son project of building Tyler’s Chevelle. The Chevy is a California car. The Pickrems had it shipped to Michigan, where they picked it up and trailered it to their home in Nova Scotia, Canada.

The plan was to have it ready by Tyler’s 16th birthday. Amazingly, for the first time ever in hot rodding history, the build was completed ahead of schedule, and Tyler’s first rides in the Chevelle were as a passenger while Mom or Dad drove.

That father-son project was a big one. “It had a solid body,” Tyler recalled, “and the underneath was solid – nice and dry – but it needed a total restoration. It had no engine, transmission, or interior. We did all of the work here.”

They left the body on the frame, and it’s all the original steel, but stripped it down to bare metal. It was painted in gray primer, and that is still the color today. “We painted it to match my Mom’s Camaro,” Tyler said, “flat gray with gloss black stripes.

Tyler may paint it a different color. Or maybe he won’t. “I’m not sure,” he said. “I’m throwing it back and forth. Maybe flipping it – gloss black with flat black stripes. Or maybe the original Fathom Blue color. I might re-do the same paint job. I honestly don’t know.”

Tyler and Craig initially outfitted the Chevelle with a 350 cubic inch small block Chevy (obtained from a tow truck), mated to a 350 TurboHydramatic (from one of Craig’s other projects). The SBC was outfitted with a set of heads from Jackie’s drag racing Camaro, a ¾ race cam from Crane Cams, an Edlebrock Torker II manifold, and a 750 cfm Holley 4-barrel. Sounds pretty healthy. 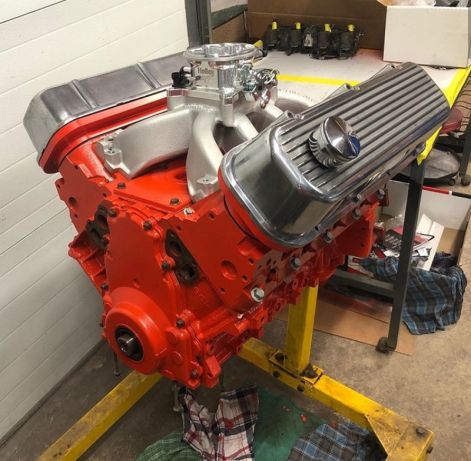 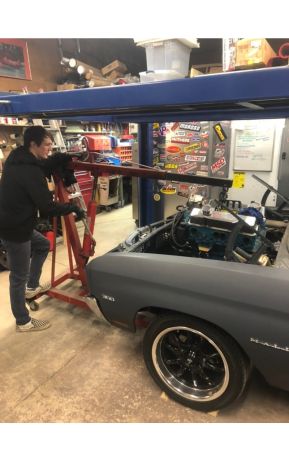 But apparently it wasn’t healthy enough, because Tyler’s in the middle of swapping the 350 out for an LS. Of course, the LS will have EFI and full computer control, and Tyler’s adding a Tick Performance cam, ported 243 heads and a Victor Junior intake manifold. Headers and a full 2.5 inch stainless exhaust system, with Flowmater mufflers, will help the LS breathe. Tyler expects it to put out somewhere around 550 horsepower. To fit better with the 1970 A body, Tyler is opting to make the LS look like a vintage big block Chevy.

The LS will work through a 4L80E automatic transmission. Tyler doesn’t have to rework the trans since it has very few kilometers on it. The automatic’s torque converter has a stout 3500 stall speed, but it also has full lock up. Tyler will be picking his gears with a B&M ratchet shifter. He’s using Holley components, designed especially for installing the LS/4L80E combination in GM A bodies, to install the new powertrain in the 1970 chassis.

The Chevelle has had two rear ends in its life. Initially Tyler installed a 12-bolt with 4.10 gears. No doubt that was influenced by all those years at the drag strip. Eventually, he replaced that with a 10-bolt with 3.08 gears to make street cruising a little easier. But the 12-bolt is going back in, complete with the 4.10s, since the 4L80E has overdrive.

The stock coil springs are still at all four corners, with new shocks. Tyler’s thinking about changing to coilovers, but hasn’t made that swap yet. The factory front disk and rear drum brakes bring the Chevelle to a halt.

Reproduction components have restored the fully stock interior to factory condition, including the bucket seats and center console. 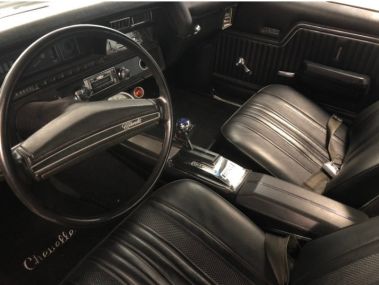 Tyler is going to take the Chevelle to the strip when it’s finished, “just to see what it can do,” he said. But since he and Danielle spend most weekends racing the family’s D/SA Chevelle, Tyler’s Chevelle is meant to be a street machine.

That will work out well since Nova Scotia has a very active hot rod community. The province is pretty far north, sitting in the Atlantic just east of Maine, but the weather is warming up now. Tyler says the hot rod season usually gets started in April.

One of the highlights is the Atlantic Nationals car show in the nearby province of New Brunswick. The show typically has a few thousand cars in attendance. But whether the 20th anniversary Nationals will take place this year is still uncertain, pending the coronavirus pandemic.

Whenever the next one is held, maybe the Pickrems will make it a family affair. Jackie’s Camaro and Craig’s Tri Five have retired from drag racing and are street cars now. Danielle drives a ‘66 Chevy II. No doubt they are all fine hot rods.

But I suspect they’ll all have trouble keeping up with Tyler’s LS powered Chevelle.