May, 1972. Eighteen-year-old Carl Theaker becomes the proud owner of a 1968 American Motors AMX. Sets him back $61 per month.

“And like any good kid,” Carl recalled, “I hot rodded it up.”

He installed headers, Cherry Bomb mufflers, a Borg Warner electronic ignition (very advanced for back then), and mag wheels. He removed chrome trim. And he drove his AMX hot rod every day.

Fast forward 20 years. Carl realizes he’s got a very-hard-to-find classic American sports car on his hands, and decides he wants to bring it back to original condition. And he gets a huge assist from his parents. 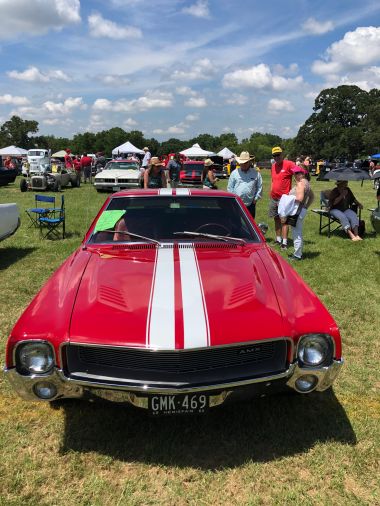 “Fortunately, when I want to restore it, my parents hadn’t thrown anything away,” he said. Wheels, exhaust manifolds, yes, even the chrome trim pieces. Carl and his wife Jackie set out to bring 1968 back to life again.

Carl is the third owner of his AMX, which came from American Motors with a 343 cubic inch V8, 4-barrel carb, dual exhausts, 3-speed automatic transmission, and factory air conditioning (“Thank goodness” Carl said as we stood in the heat of July in Texas). 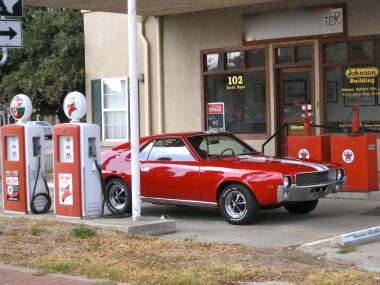 And with the exception of an open element air cleaner and rear window louvers, that’s exactly how you’ll find his AMX today.

The car was Carl’s daily driver for many years. And when Carl says daily driver, he doesn’t just mean going to work. “I drove it coast to coast,” he told me, “to California twice, up and down the West coast, and Boston once.”

All that driving put about 180 thousand miles on the 343. So 10 years ago, Carl completely rebuilt the engine. He used all factory parts, including the Carter 4-barrel carb, and the original GM ignition AMC was using in those days. Despite having previously used the Borg Warner electronic ignition, Carl’s happy with the current points and condenser set up, saying, “It works. And I have backup parts.”

Even though the small block’s got a stout 10:1 compression ratio, Carl can still run on pump gas, albeit premium. The valves have been set up for use with unleaded gas. Exhaust exits through the factory manifolds into a straight through stainless steel dual exhaust, still using the stock AMC mufflers (no more Cherry Bombs). The three speed automatic is all AMC and turns the 3:15 gear in the AMX’s “Twin Grip” limited slip differential.

The front coil spring suspension uses AMC’s famous trunnion set up. If you read the GHR article on Jay Linski’s ‘64 Rambler earlier this year, you may remember that when I wrote that article I didn’t understand the trunnion set up. I still don’t. Fortunately, Carl had the trunnions rebuilt in 1975 when everyone understood them. And had parts. 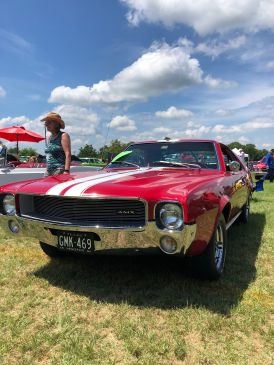 Leaf springs support the solid axle rear end. Both front and rear suspensions are beefed up thanks to the Go Pack. There’s also additional diagonal bracing in the engine compartment to stiffen up the AMX and help it handle corners with ease. Power front disk and rear drum brakes bring the 2-seater quickly to a stop.

Some parts used in the AMX are shared with other AMC cars. Those are pretty easy to find. Some are shared with the same generation Javelins. Those are not too hard to find. And some are only for the AMX. Those are really hard to find. The louvered hood, grill, trim, and the entire body behind the doors, fall in that “AMX-only” category. Fortunately, Carl’s body has avoided any major damage, and Carl’s still using his original parts.

The beautiful red paint and white stripes are the factory colors. But after a few years in Texas, Carl said the paint was fading to a nice “Texas red” (shown below) so he had the car repainted five years ago.

Jackie gets credit for painstakingly restoring the grill and rocker panel trim. Polishing up the aluminum and repainting the black areas required all of her artistic abilities. Jackie had to use a silver paint pen on the grill, going over each thin horizontal bar one by one. Those bars make the grill fairly fragile, so Carl’s put some “Do Not Lean Here” stickers on it to prevent inadvertent damage at car shows.

Jackie also spruced up the 1968 HemisFair license plates on the AMX. HemisFair ’68 was the official 1968 World’s Fair which was held in San Antonio, Texas. Getting two matching license plates was a real find.

Carl didn’t skip any details on the exterior. All the weatherstriping has been replaced. The trunk has been restored to factory condition, including the very innovative for the time inflatable spare tire. Carl even hand-sanded and painted every nook and cranny on the spare tire’s wheel – before he realized it gets mounted face down in the trunk.

The louvers Carl installed on the rear window are another nod to the Texas sun, working to keep the interior – and Carl and Jackie – from getting too much exposure. And it’s a good idea to keep the interior protected because it’s in great shape. Carl and a friend rebuilt the seats and installed new carpet. The factory three-point seat belts still work just fine.

I was surprised to learn the seats have the fold-down-flat capability Rambler/AMC’s are well known for. “It’s a great drive-in movie car,” Carl said, “but not for what you’re thinking.” (I was.) Carl explained that with the seats folded flat and a blanket thrown down, the interior was as comfortable as your living room for watching a movie. And it makes a great home for Stan the Stegosaurus, who you can see below hiding in the back. (He’s shy.) 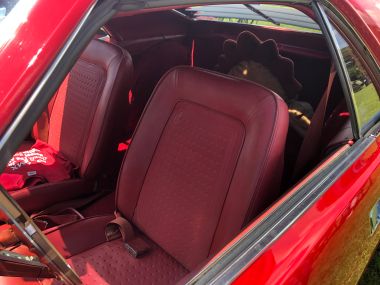 The original dashboard is still in excellent condition. The AMX was arguably American Motors’ premier production car. As such, every 68-70 AMX came with a numbered dash plaque. Carl’s is number 2860.

The factory AM/FM/8 track stereo is also installed in that dashboard. Carl always inserts an 8 track tape when he goes to car shows (it was Let It Be for the McDade show), and it never fails to spark discussion. Several folks commented on it while we were talking, and Carl and I had a 5 minute discussion on how we still remember where tapes skipped to the next track in the middle of songs. (We agreed that skipping tracks in the middle of “Stairway to Heaven” was just plain wrong.)

Carl’s monthly payment of $61 per month doesn’t sound like too much in 2019, but in 1972 it was a full week’s pay for him. At that time, he was living in Ohio, and not even Midwest blizzards would prevent him from driving the AMX to work. “I’d drive it every day. I’d put snow tires on the back and it would go through anything,” he said. “I had to make my $61 per week.”

Forty-seven years later, Carl and his AMX have gone from stock, to hot rod, and back to stock again.  With all the work and care he and Jackie have put into it, it’s no wonder Carl says “It’s family.”

Photos by GHR and courtesy of Carl Theaker.