“The story of this whole car,” Anthony Guillebeau told me, “is that everything had to be done 2 or 3 times.” That’s not an uncommon occurrence in hot rodding, but rarely do the results come out as beautiful, and as finely detailed, as Anthony’s 1966 Ford Fairlane.

Amazingly, this Fairlane was a one owner car up until 2005. Anthony, who runs Guillebeau Iron, Inc., found the car via the Internet. “It’s always been my favorite body style,’ he said. “The ‘66 and ‘67 cars are a lot alike, but I like the ‘66 better.” The car was in Minnesota, so Anthony had someone up there check it out, and when he got a positive report, he purchased it and had it shipped.

Originally a 289, 3-speed on the column car, Anthony’s six year project includes engine, transmission, and suspension upgrades, extensive body work, new paint, and the addition of some modern creature comforts – all done by Anthony himself.

“I wanted a factory black car,” he said, “and I found this one. It had a good body. It wasn’t a rust bucket.” With a good base to work from, Anthony took the chrome trim off the car and welded up the holes. He made sure the door and body panel gaps were spot on. And then he said, “I did a lot of block sanding. And more block sanding.” 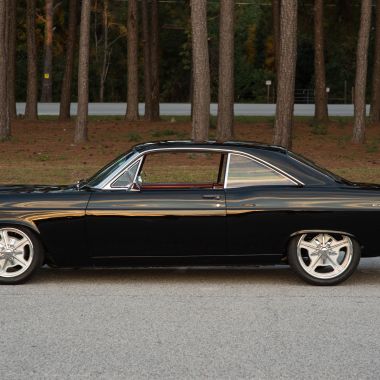 All that care – and block sanding – were well worth it. The body of Anthony’s Fairlane is spectacular. While we were talking at the Memories in Monroe Classic Car show, a woman come up and said the paint looked like it was still wet. And Anthony reports that a lot of GM guys have told him “I’m not a Ford guy, but I really like that body style.” Obviously Anthony’s extensive efforts have paid off.

That original 289 is gone. “I had a 428 Cobra Jet, originally out of a ‘69 Mach 1,” Antony said, “and that’s what I wanted to use.” The big block features a stock short block and heads, and a Comp Cam Thumper roller cam with shaft-mounted roller rocker arms. Anthony tweaked the oil system a bit to improve the lubrication. The largest radiator Griffin makes helps keep everything at the right temperature.

The most notable change to the CJ engine is the 1962 406 Tri-power intake system featuring three two-barrel carbs on top. Anthony fabricated the step-progressive linkage for the carbs and a custom fast idle solenoid that he can activate from a switch in the interior. The solenoid helps keep the idle speed up when the Vintage Air A/C is on.

“You really have to work on those carbs to set them up,” Anthony said, “but once they’re right, they run great. It runs mostly off the center carb only, so the fuel economy is better than you’d think.”

A Duraspark FE-style distributor is controlled by an MSD electronic ignition. The MSD electronics are mounted behind a panel in the engine compartment on the passenger side. Anthony also ran a new wiring harness for the car in a channel along the driver’s side. Combined with the serpentine belt system, it’s one of the cleanest and most factory-looking engine compartments you’ll see on a power steering, power brakes, and air conditioning equipped hot rod. “I was going for a factory hot rod look,” Anthony told me. “I wanted to bring it up to date, but not be too radical.”

The hardest part of the engine swap was getting the headers to fit. “I had a time with the headers on this car,” he said. “The first set I bought… I finally got those things in there while the car was up on jack stands. When I lowered the car to the floor, the collectors were about 1” off the floor.”

A set of Ford Powertrain Applications Tri-Y headers solved the floor clearance problems. But Anthony still had to notch the shock towers about an inch. And even then, the fit is tight. The FPA headers exit out to a 2 ½” dual exhaust system with an H-pipe. Flowmaster mufflers and stainless steel resonators provide a throaty, only slightly toned down, exhaust note. 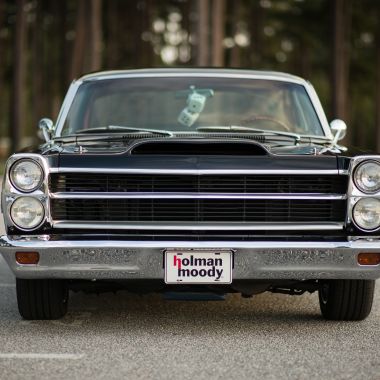 The drivetrain behind the Cobra Jet consists of a TREMEC TKO 5-Speed overdrive transmission and a narrowed Ford 9” rear with 4.11 gears. The overdrive 5th gear allows Anthony to cruise all day at highway speeds while turning a leisurely 2000 rpm.

The rear suspension is a Heidts 4-link. Anthony originally built the car with 17” Torq Thrust wheels, but he decided he wanted a little more. So he installed mini-tubs in the back and filled them with Billet Specialties 19-inch wheels. They look great.

The front end has the factory style coil spring set-up, but with Fatman Fabrications 2-inch dropped spindles and the matching disk brakes. Anthony reports that the suspension and power steering give a “late model feel” when he’s out cruising.

The interior was in great shape when Anthony got the Ford. The door panels and headliner are the original parts. There was one bad spot on the front seats that he couldn’t match properly, so Anthony had the stock front and rear seats recovered. A vintage 1973 Sun tachometer sits on the steering column. 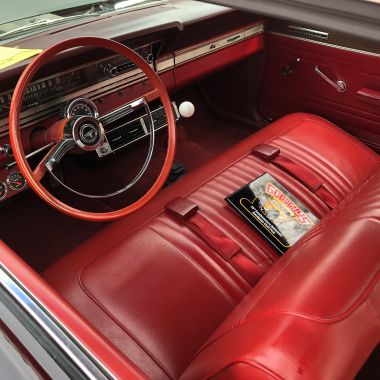 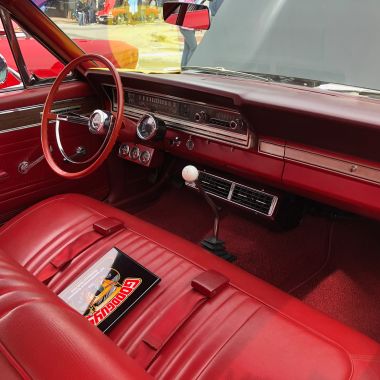 In keeping with his attention to detail, Anthony has sent out the factory dash trim pieces to be re-chromed, but not before he purchased replacements to keep the dash looking good while the re-chroming is being completed. When those pieces come back, he’s also going to move the three gauges currently under the dash to where the Ford AM radio is. When he’s done, Anthony promises “it will look like it was factory”.

A quick look in the trunk let’s you see – well, actually it does NOT let you see – some additional upgrades. You can’t see those upgrades because of the detailing Anthony has done back there as well. The subwoofer and amp for his digitally-equipped stereo are hidden from view. The only stereo components you can see are the factory-style speaker grates on the rear package shelf. You can probably guess that one of the boxes on the side of the trunk is for the battery. It does contain the battery, along with some fuses and relays. The matching box on the driver’s side is for a vacuum pump to assist the power steering. The 428’s cam is designed for horsepower, not vacuum, so the pump helps out. 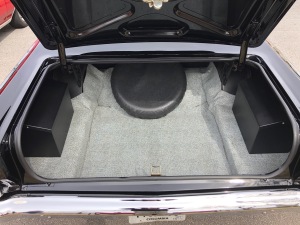 Anthony says he has every receipt for the parts he’s purchased, but he hasn’t added them all up. “I probably don’t want to know,” he said. But to him, that’s not how the value of his Fairlane is determined.

“When you build your own car,” he said, “you have a lot of money in parts, but I spent more of my time. That’s more valuable than the money. I’ve got six years of my life invested in this car. A lot of people want to buy it, and they throw out some big numbers. But I don’t ever want to get rid of it. If I sell it, what am I going to do next? Go out and find another one?”

“You get a sentimental attachment to it. I know what this car is. I know what I like. I’m not doing it for the money.”

You can see that when you look at how Anthony’s Fairlane has been planned and executed. And you can hear it in his voice when he talks about it.

Photos by GHR and courtesy of Anthony Guillebeau
Click here to see photos of Anthony’s Fairlane.

One Reply to “Anthony Guillebeau’s ’66 Fairlane”