In 1965, Matthew Olson’s grandmother walked into a Ford dealership in South Florida and purchased a Ford Mustang. “My family loved it,” Matthew told me. “It was the first car in the family with an automatic transmission and air conditioning, and the first ‘new’ car the family ever purchased.”

The ‘Stang has had a few updates, but what Matthew showed at the the Caffeine and Octane show in December is still the same car that his family has loved for 53 years.

“My father told me stories about how his mom would let him take the car out sometimes. He kept a set of spare tires at a friend’s house. He’d swap the tires out so he could go drag racing and have fun with it.” 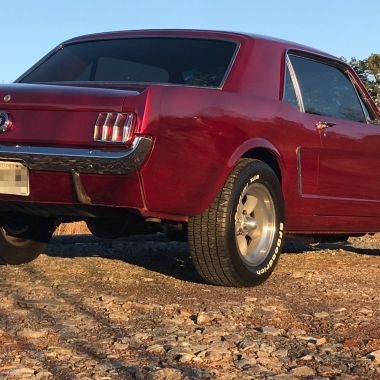 About 30 years ago, Matthew’s Dad took ownership of the Mustang. He kept the car well-maintained in its stock form. Then, in 2016, Dad said ‘OK Matthew, it’s your turn.’

At about that time, Matthew asked his fiancé to marry him. She said yes. Then, as Matthew recalled, “About a month later, I realized ‘Uh oh. I better get this done before I get married.’” 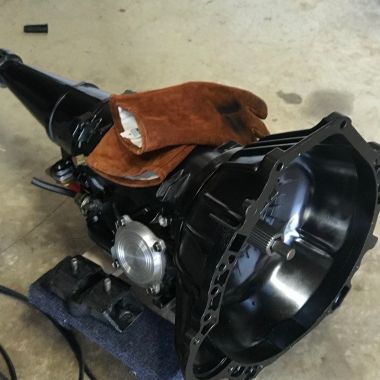 “It literally dominoed,” Matthew said. “I went about four times over my original budget, but I got away with it because I wasn’t married yet, and seeing my father’s face fill with amazement over the updates and changes he never felt possible really pushed me internally to keep going. After all, my main goal of rebuilding the car was to make it extremely reliable for my father to the point he could get in it and drive anywhere, and make it where I could have some fun at the same time, whether it be at the drag strip or just cruising down the road.”

The original 289 has been replaced by a bored and stroked 302, now displacing 347 cubic inches, from BluePrint engines. The engine is fed by a 600 cfm Holley 4-barrel. Spark is provided by an MSD electronic ignition with a 6AL ignition control box. The control box also serves as a rev limiter for those times when Matthew gets a little too enthusiastic behind the wheel. BBK long tube headers feed into a cross-piped dual exhaust system fabricated by G&S Muffler in Kennesaw, Georgia. It all adds up to about 440 horsepower. 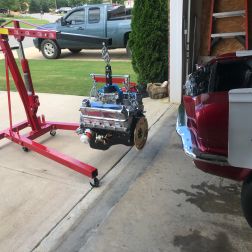 The front of the V8 features a great looking v-belt system from CVF Racing. Matthew went with the v-belt system to keep the 60s feel of the car. The CVF kit includes the compressor, alternator, power steering and water pumps, brackets, and even the nuts and bolts.

The chassis is stock, except for all new suspension components and four-wheel disc brakes, sub frame connectors and a couple other small modifications to update safety and handling to today’s standards.

Matthew knew he had to address the brakes during his build, because his entire family was familiar with the braking method necessary with the Mustang’s old brakes. “We all knew,” he told me, “that if you hit the brakes you had start steering to the left.” Disk brakes with four piston calipers up front and single pistons in the rear took care of that.

The new rear springs are stock height. The front has been dropped one inch. This combo, along with the American Racing wheels at all four corners, give the Mustang a great stance and classic look with the slight forward rake.

Grandma’s white Pony Express interior has been updated with a lot of tan and black to better match the paint, but Matthew kept as much of the Pony Express flavor as possible. The instrument cluster and most of the chrome trim pieces are original. 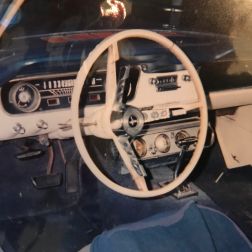 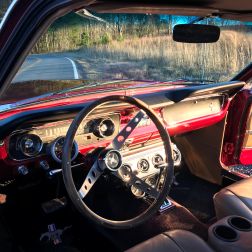 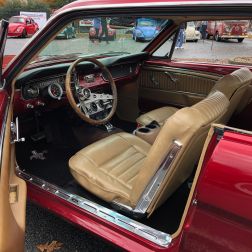 Getting everything straight and lined up was the most challenging part of the build. The car’s South Florida origins resulted in a fair amount of rust that had to be addressed in the floorboards, quarter panels, and front fenders. Matthew said it occasionally required “walking away to grab a beer and scratching your head.” The original baby blue paint has been replaced with tri-tone Ford red.

Matthew’s “freshen it up” budget was $5,000. But with all those “might as well” decisions mentioned earlier, and the fact that, as Matthew said, “Absolutely nothing went according to plan,” he estimates he has around $15K invested so far. Although he farmed out some of the more intricate work, Matthew did as much of the installation work as he could to keep the costs lower. “About 3 months ago,” Matthew told me, “I stopped adding up my receipts. I figured why? I’m never going to sell it so does it really matter exactly what I put in it?”

The end result is a classic American hot rod. “It’s a daily streetable car,” Matthew reports, “but if you want to get out and have some fun and rip some donuts or go to a drag strip it’s built for it.”

And it’s a car that “absolutely will never be sold,” Matthew said. “My son will be six in January and when it’s time for him to start driving, I plan to pass the torch to him.”