In 1979 Mike Lacomba was lying on a dirt driveway at a friend’s house under his 1970 Pontiac Trans Am. A friend brought by a young woman named Robin and introduced her to Mike.

She most certainly did.

It’s now 39 years later and Mike and Robin and the Trans Am are still together and they’re all looking great.

The gorgeous Firebird Mike and Robin drove to the recent Gateway Classics car show in Alpharetta, GA belies the car’s condition when Mike purchased it in ‘79.

They were living in Columbia, SC at the time (note their South Carolina Gamecock t-shirts). The interior was essentially bare except for blue Astroturf carpeting. The body was in pretty rough shape too. But as Mike describes the big block 4-speed Firebird, “It was lots of fun.” It was quick and fast and perfect for him to use as a daily driver during the week and at Blaney drag strip on the weekend.

Then, Mike says, “We got married, we had kids, and the car took a back seat.”

In 2017, Mike and Robin were empty nesters, their first grandchild was born, and Mike thought “it might be now or never.” In March of that year, Mike and Robin voted for now.

For the body, “a whole lot more” included two rear quarter panels, floor pans, the roof panel, a tail panel. The body work is the only work Mike didn’t do himself. Rusty’s Rod Shop in Cleveland, GA took care of the sheet metal.

Both rear quarter panels were replaced

Mike did everything else. Engine. Transmission. Drive Train. Chassis. Interior.

The beautifully detailed engine is a 400 cubic inch Pontiac Ram Air 3 big block, featuring D-port heads and a 10.75:1 compression ratio. Mike built it to factory specs, except that it currently has Doug’s headers and a Pontiac four barrel carb that is not an original Ram Air 3 carb. (Those official Ram Air 3 carbs can cost upwards of $4500 today.)

The motor spins a Muncie M-21 4-speed transmission and a stock rear end with 3.73 gears. The close ratio trans with that rear end ratio results in the engine spinning at about 3000 rpm when Mike and Robin are cruising down the highway. Mike completely rebuilt the transmission and the rear end. 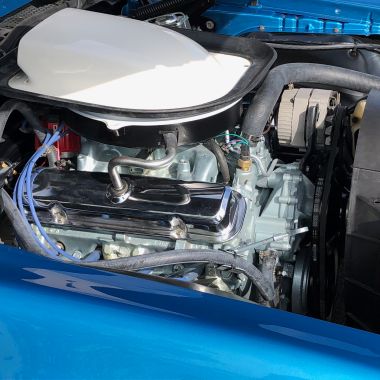 The chassis is just as nice as the rest of the car.

The Trans Am’s chassis got a full rebuild as well. Subframes came off and were rebuilt, and the suspension was completely worked over, including polyurethane bushings all around and new front springs. Brakes were reworked and brake lines replaced.

When the car came back from Rusty’s Rod Shop, Mike wrapped it all up. He completely redid the interior (without Astroturf) and he applied the factory-correct Trans Am stripes on the hood, roof, and trunk. 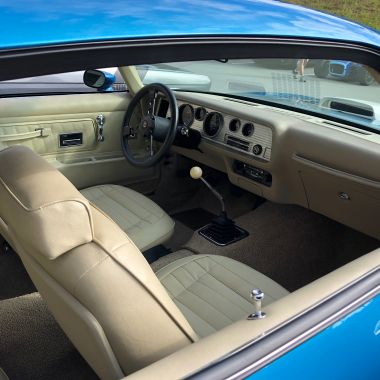 Mike did all the interior work himself.

YearOne wheels give the car a great stance.

The final touch to the outstanding exterior are the YearOne cast aluminum wheels. The wheels mimic the Rally wheels that came from the factory, but they tuck some wide rubber under the front and rear wheel wells – and they give the car an aggressive stance that is just perfect. 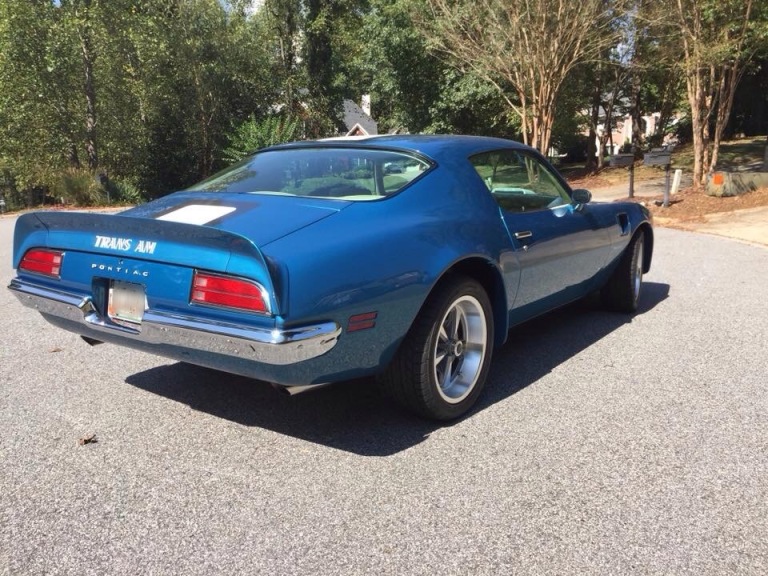 When he was planning out this build, Mike tried to come up with a realistic cost estimate for doing the work. Now that it’s done, he thinks he came in about 30% over that estimate. That’s pretty darn good in my book.

The current rebuild took about 18 months. I asked Robin if she minded Mike being in the garage so much. “Oh no,” she replied. Then, laughing, she said, “It was having all the car parts in the kitchen, and the dining room, and the bonus room… But it was OK. It was very therapeutic for Mike.” 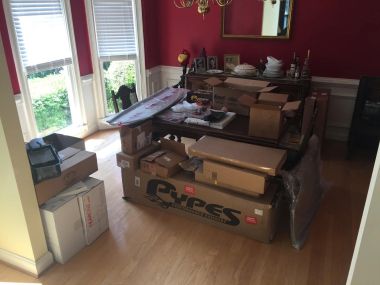 Occasionally the project took over the house…

Mike had goals for this build of his hot rod – a car that’s been part of his and Robin’s life together. “I wanted to keep it fairly original,” he told me, “but I want to drive it and I want to enjoy the car. This is my youth. I have a connection to it.”

Robin summed it all up pretty well: “It’s incredible what he can do. He’s done a good job.”

Photos by GHR and courtesy of Mike Lacomba
Click here to see more pictures of Mike and Robin’s Trans Am.